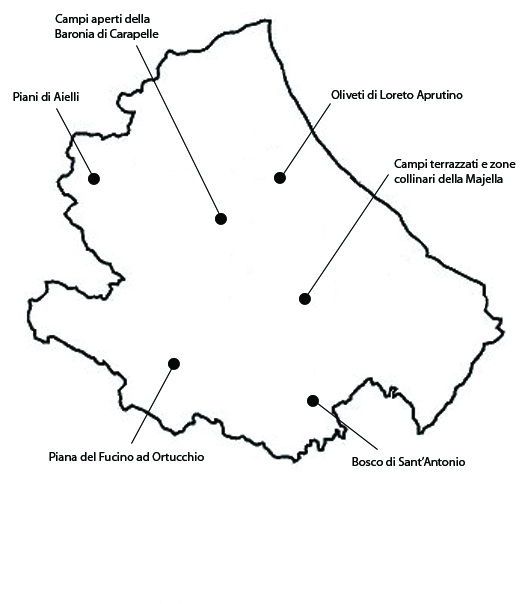 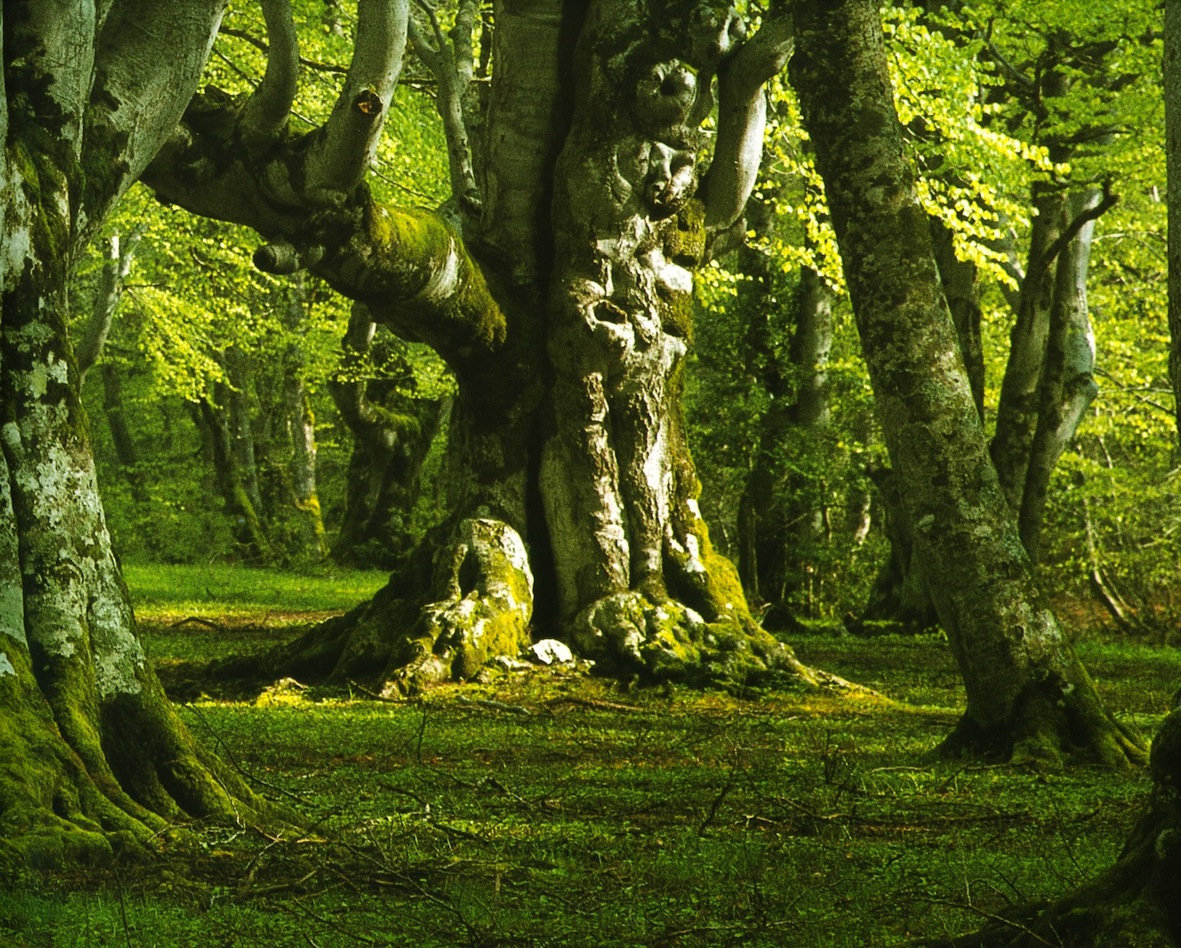 This is a wooded landscape extending over about 710 ha in the commune of Pestocostanzo, partly owned by the municipality and partly privately. Today it lies within the Maiella National Park. The area owes its significance to its historical persistence and the peculiarity of its wood cover, characterized by pollarded beech trees, a traditional form of pruning to produce fodder. These are a typical, if little known, feature of many Abruzzan woods, whose importance as a landscape feature is underrecognized. One of the first landscape preservation battles in the history of the Italian Republic was fought in defense of the S. Antonio Woods and also Luigi Einaudi, former President of the Italian Republic (1948-1955) stressed the need to protect this forest. The S. Antonio Wood is especially remarkable for the size and composition of their trees, which include beech, Turkish oak, field maple and other species of maple, cherry, pear and holly trees growing to larger than average sizes. Over thousands of years the high altitude meadows were extended to provide grazing grounds for transhumant flocks, a trend that intensified in the twentieth century. Level areas, instead, were used as pastures for bovines and equines, as well as cereal growing, although not continuously. The integrity of the area appears essentially intact, although there have been variations in the proportion of land devoted, respectively, to woodland and pasture, and in the characteristics of individual trees. For what concern vulnerability, the management of the woods is presently conditioned by the Park plan and regulations. The Park’s zoning map presently includes the woodland areas in Zone A (Integral Reserve). An accurate examination of the woods indicates that over time the characteristic gaps in the forest cover have been disappearing, and, above all, the trees have been losing their peculiar shapes determined by the practice of pollarding. 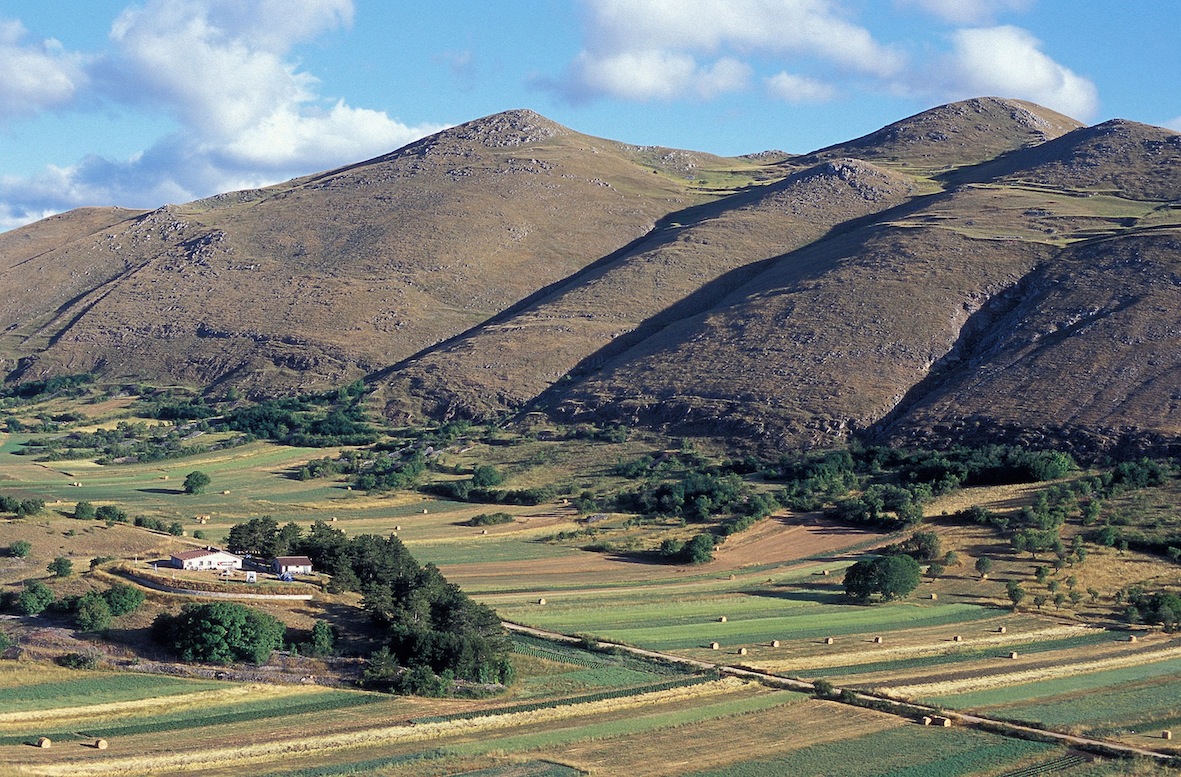 The Piani della Baronia di Carapelle are open fields lying in the Viano and Buto (“full” and “empty”) plateaus, which together form an elongated eight-shaped valley extending over about 565 ha. The area is fully included within the Gran Sasso and Monti della Laga National Park and it lies in the municipalities of Santo Stefano di Sessanio, Calascio, Castelvecchio Calvisio. The area owes its significance to its historical persistence and the beauty of its pasture and open field landscape. By the late 1200s or early 1300s, the Barony of Carapelle was a vast and important feudal dominion where agriculture and pastoralism flourished. After it had changed hands several times, in 1579 the feud was sold to the Grand Duke of Tuscany, Francesco de’ Medici. The Medici family established here their principal base of operations for the commerce of the prized carfagna wool, produced in the Barony’s estates, worked in Tuscany, and sold in Europe. The pastoral economy is thus the dominating feature of this area, although not the only one, while agriculture was mainly practiced at the family level for subsistence purposes. The local open fields go back to an agronomic system founded on community practices connected to medieval obligations. As regards integrity, the whole area still retains exceptional landscape values. The fields are surrounded with extensive pastures and woods, and are cultivated extensively employing traditional crops and practices. Especially prized crops include pulses (lentils, chickling vetch), cereals (spelt, Solina wheat, barley) and potatoes. The vulnerability of the area is determined by the decline of agropastoral activities, which is leading to the abandoning of the cultivated fields and the consequent thriving of wild fauna. Notably, every year some of the higher altitude fields are relinquished. In the valley, instead, the main risk is crop homologation.

3. Terraced fields and hills of the Majella 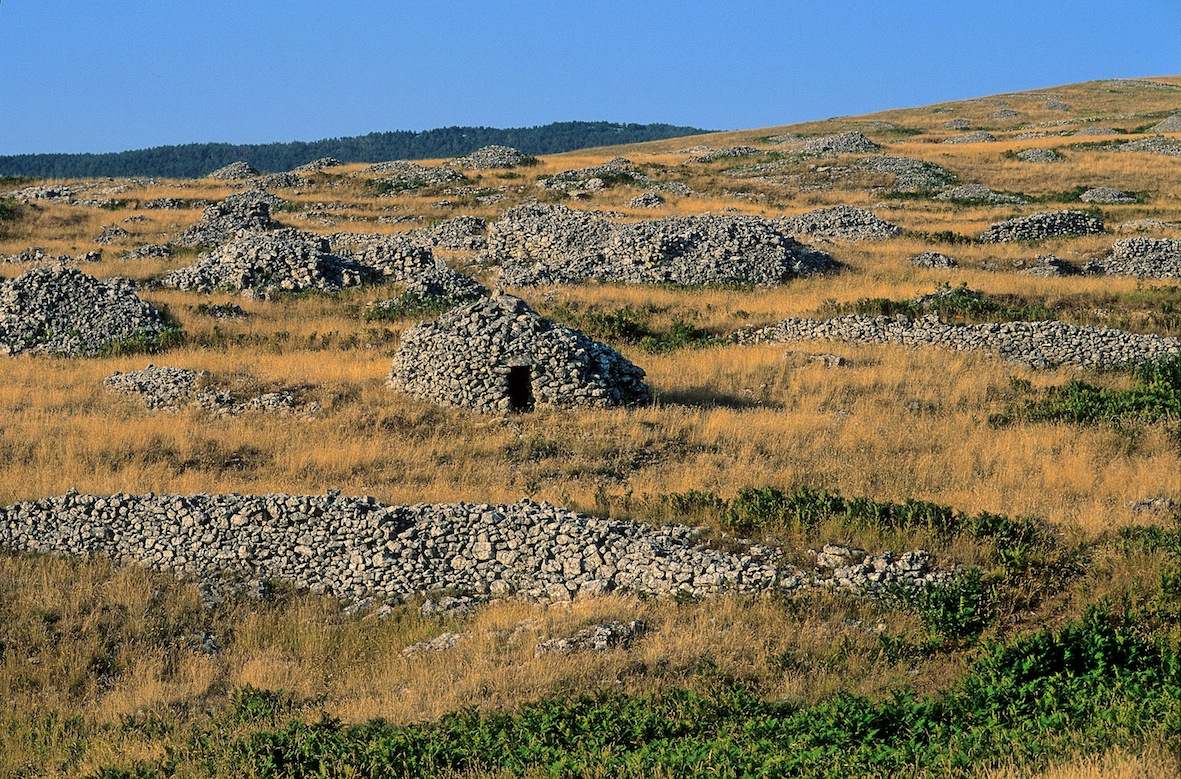 This is a terraced silvopastoral landscape extending over 1404 ha. The area falls within the municipalities of Roccamorice, Lettomanoppello, and Abbateggio. The area owes its significance especially to its terraces and dry-stone enclosures and huts, which combine with the local natural features to make this area one of the most remarkable landscapes in Italy. The rocks gathered as part of the reclaiming of fields and pastures, to exploit the thin layer of fertile soil and the sparse grasses growing among the limestone outcrops, provided building material for a high number of constructions, including about 300 huts called tholos. The landscape still shows a high degree of integrity. Agricultural activities are concentrated downhill, the result being contrasting landscapes and different forms of economic and agricultural management, with a sharp transition from pasture to shrubland, and from shrubland to intensive cultivation. On the older terraces, pastoral activity is residual. The vulnerability of the area is mainly due to land abandonment, which began around the middle of the twentieth century, leading to a slow deterioration of the dry-stone structures and of the whole agricultural landscape. Rural tourism in the area does not appear to be having a negative impact on its integrity, partially because the area lies within the Majella National Park. 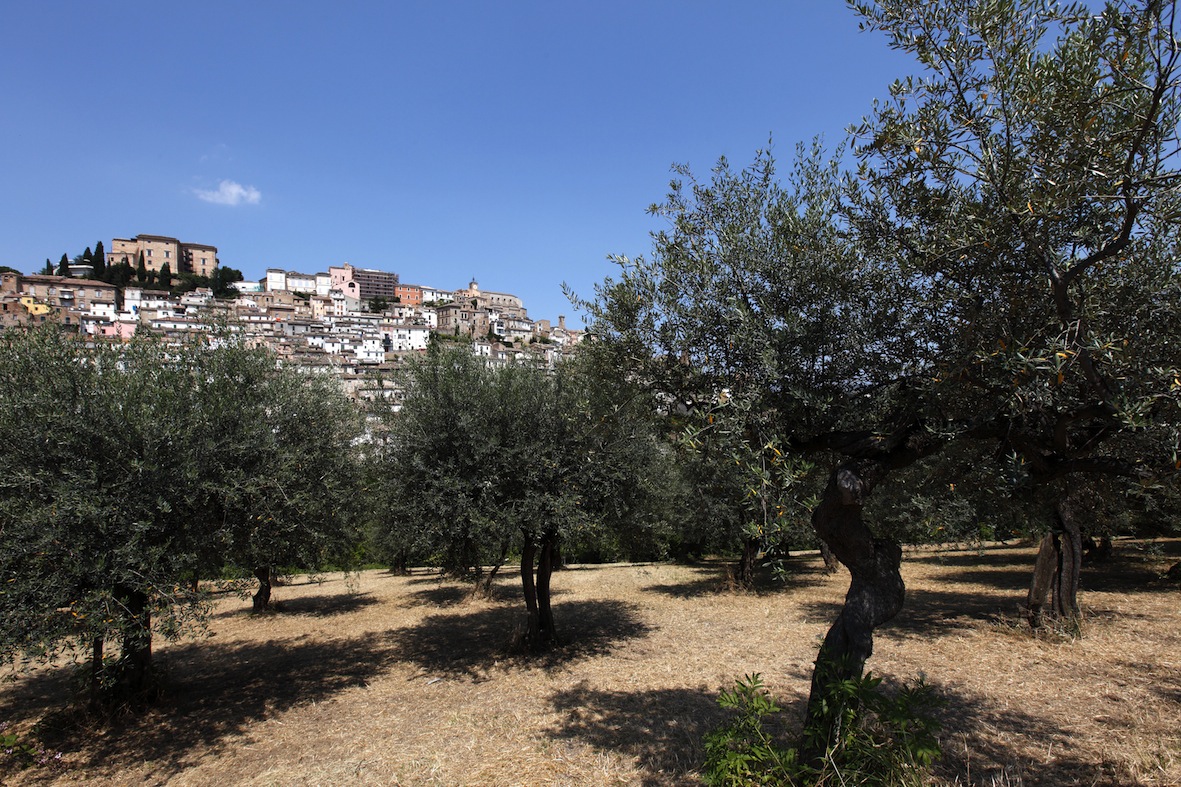 This area, extending over 1034 ha, all around the village of Loreto Aprutino, is characterized by olive cultivation, partly on terraces and adjoining vineyards. The area owes its significance to an olive orchard landscape that retains traces of several historical transitions, from Italic settling in the area back in the fifth or fourth century BC to the industrial and mercantile transformation of the local agriculture from 1870 onward, which made this area one of the most productive in Abruzzo, where it is regarded as the main center of oil production. Part of the olive orchards are arranged rationally, with the trees placed at preordained distances from one another, which are the same all over the area and hence impart a sense of regularity to the landscape. As regards integrity, the twentieth-century industrialization of agriculture had little impact on the local olive-tree landscape. Thanks to the persistence of old cropping systems, the presence of centenary olive trees, and the preservation of traditional land uses, the area manages to sustain a high-yield rural economic activity with a low landscape impact. As regards vulnerability, landslides have occurred along some stretches, and a slow process of erosion is visible. Further vulnerability could derive from excessive intensification in olive-growing involving the introduction of technologies that modify tree structure or orchard layout. 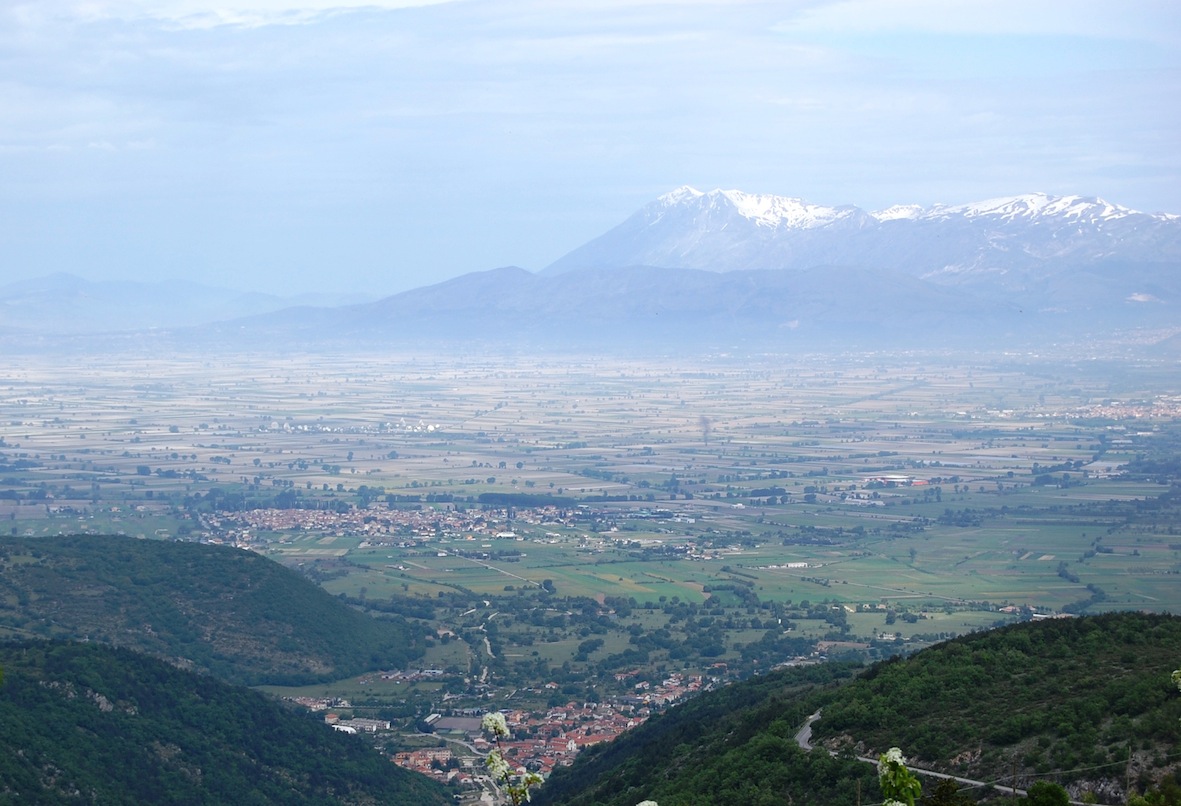 The area encompasses a portion of 2034 ha of the Piana del Fucino within the municipalities of Ortucchio and of Pescina. In the history of Italy, the draining of Lake Fucino, only completed in 1878, ranks among man’s greatest efforts to establish a domination over nature. The first attestation of the name Ortucchio dates back to the eighth or ninth century, when it appears as Hortucla, a term closely connected with the Latin horticulus. Lake Fucino was the third largest lake in Italy, extending over 150 km2. The first plans to drain date back to Caesar, who promised to do this to provide a source of food for Rome. It is the emperor Claudius, however, who finally decided to undertake the work, which required 30,000 slaves and eleven years. They did not, however, achieve the desired end. Neglect and lack of maintenance of the canals allowed the lake to regain to its original extension. In 1854, Alessandro Torlonia decided to start land reclaiming works. The draining brought benefits, but also high environmental costs. Before the land reclaiming and the agrarian reform of 1950, the area was used for cultivation of grapevine, olive and almond trees. Since the late nineteenth century, the climate of the Piana has become continental, with harsh winters. The typical crops of Mediterranean-climate areas could hence no longer be grown. The area’s main crops today are the Fucino Carrot (Protected Geographical Designation), the Fucino Potato (Protected Geographical Designation) and garden vegetables. As regards vulnerability, the climate change caused by the draining of the lake led to a transition from traditional to intensive agriculture requiring a large quantity of water both for irrigation and for transformation and packaging processes.

This area is a vast plateau covered with meadows, fields and wooded pastures, extending over 947 ha, in the municipalities of Pizzoli, Barete, Cagnano Amiterno, Montereale, and it lies within the Gran Sasso and Monti della Laga National Park. The area owes its significance to the historical persistence of a fascinating landscape of pastures and meadows connected with the transhumant breeding tradition of Pizzoli and Barete. Human presence in the area is documented from the Bronze Age (ca. 3500 years ago) onward. The name Aiello is a common Italian toponym derived from the Latin agellus, a diminutive of ager, field. In the twentieth century, from April to October the populations of Barete and Pizzoli grazed their sheep, cows and horses, and rotated crops such as barley, wheat, and medicinal herbs for the rest periods, or lentils, cicerchie (grass pea), chickpeas and potatoes. The area provides a significant example of vertical migration. As regards the integrity of the Piani di Aielli, today the ribbon-shaped structure of the open common wheat fields is still visible, alongside the mown fields where livestock is raised and small potato and vegetable gardens. The boars living in the area, whose population is on the rise lately, often damage these cultivations and discourage farmers from extending them, in spite of fences and electric wires. As regards vulnerability, over the last few years the gradual abandonment of agriculture in the highland fields of the Apennines and of sedentary livestock raising in the mountain pastures of the Aterno has caused a decline of human presence in the Piani. Some plots have been abandoned and the dry-stone walls are no longer maintained.