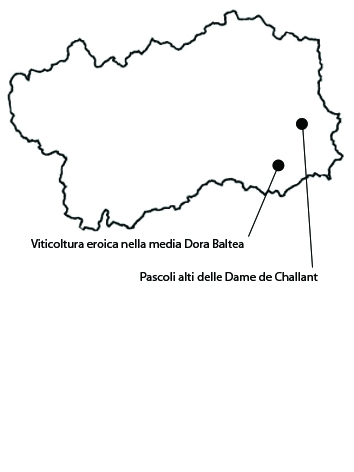 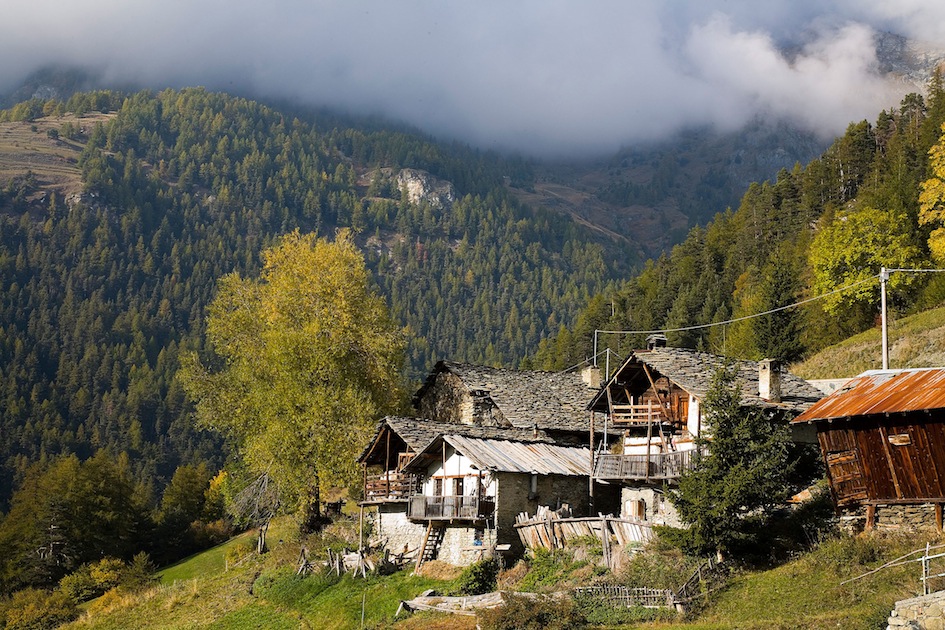 This pasture area extends for about 1268 ha, in the municipalities of Brusson, Challand-Saint-Anselme, Challand-Saint-Victor and Issime. The significance of the area lies in the persistence of an historical landscape resulting from high-altitude pasturing, an activity that since antiquity had been the main resource of the Valle d’Aosta, and of almost all high-mountain areas, since the altitude and the brief warm season are a major obstacle to any type of cultivation. At particularly high altitudes, usually around 1800-2000 m a.s.l., where not even rye would grow, all the land could offer was grass. The few heads of livestock owned by each family in the winter were kept in stables and fed with hay, while in the half-seasons they were transferred to huts at medium altitudes, in order to allow grass to grow in mowable areas and forage to be stocked for the winter. These small pastures called mayèn were mostly located in clearings obtained from the deforestation of the flatter areas, a practice that has created a peculiar type of forest, which seen from above presents a number of ‘holes’ of lighter green. During the summer, livestock was rented to shepherds, who often also brought their own animals from the plains. Shepherds gathered the livestock into large herds and took it to the high pastures. Many of the mountain pastures are still used and various types of cheese are produced, including the Toma di Gressoney, which is on the list of the Slow Food association. The landscape largely retains in integrity. A few country roads have been built, most of them dirt roads, and a few large modern stables more suited to the present needs. Many areas cannot be accessed by road, which has helped them retain intact their original high-mountain landscape, also thanks to the fact that many of the larger pastures are still being used and that buildings have been rebuilt subject landscape plan regulations. The greatest threat against the integrity of high-altitude pastures comes from the expansion of ski-slopes.

2. The heroic viticulture of the Dora Baltea area 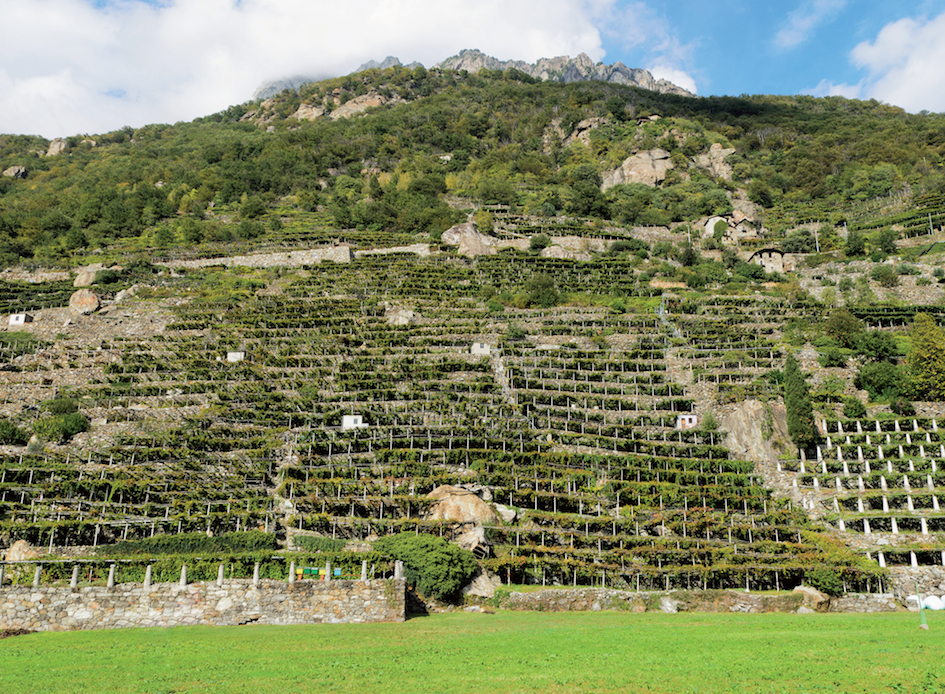 The area of about 277 hectares corresponds to the vineyards on the south-looking slopes on the left and right bank of the Dora Baltea, in the municipalities of Pont-Sant-Martin, Perloz, Donnas, Bard. The significance of the area lies in its beauty and in the persistence of the historical features of mountain viticulture, documented by an abundance of inventories and notary acts concerning wills and sales, dating from the 13th to the 20th century. Sixteenth century documents attest the presence of viticulture and the exportation of wine and grappa towards the area of Vallese. Wine grapes were never an isolated cultivation, rather they were part of a polycultural organization, which integrated grapes with cereals, fodder, and other small fruit and vegetable cultivations for personal consumption. In the Valle d’Aosta region, the scarcity of farmland, natural dangers, the steepness of the land, a problematic climate and the consequently forced seasonal nature of agriculture led to a type of farming that integrated various productions according to the altitude. Each farm was actually made up of different properties located at different altitudes. This made it possible to concentrate on different crops, depending on the season. Notwithstanding the presence of urbanized areas, the traditional landscape has largely maintained its integrity. While vineyards are subdivided into very small holdings, on a visual level they appear as a continuous landscape, which shows the incredible job performed throughout the centuries to farm lands that in themselves were ill-suited to agriculture. From this vineyard is produced the high quality wine “Valle d’Aosta subarea Donnas” DOC (Controlled Origin Denomination). The vulnerability of the area can be summarized as following. At the beginning of the twentieth century, the damage caused by phylloxera caused a decrease in vineyard surface throughout the valley. Much vineyard land has been abandoned and colonized by woods. Since property was highly fragmented, being part of an agriculture oriented towards family support, the landscape has been subject to interruptions that threaten its integrity altering the balance of an environment which is definitely marked by human presence and can continue to exist only through continuous maintenance.