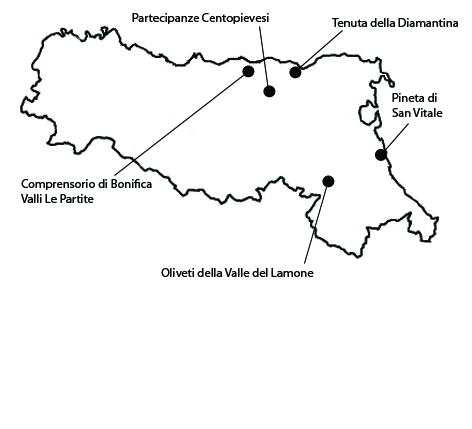 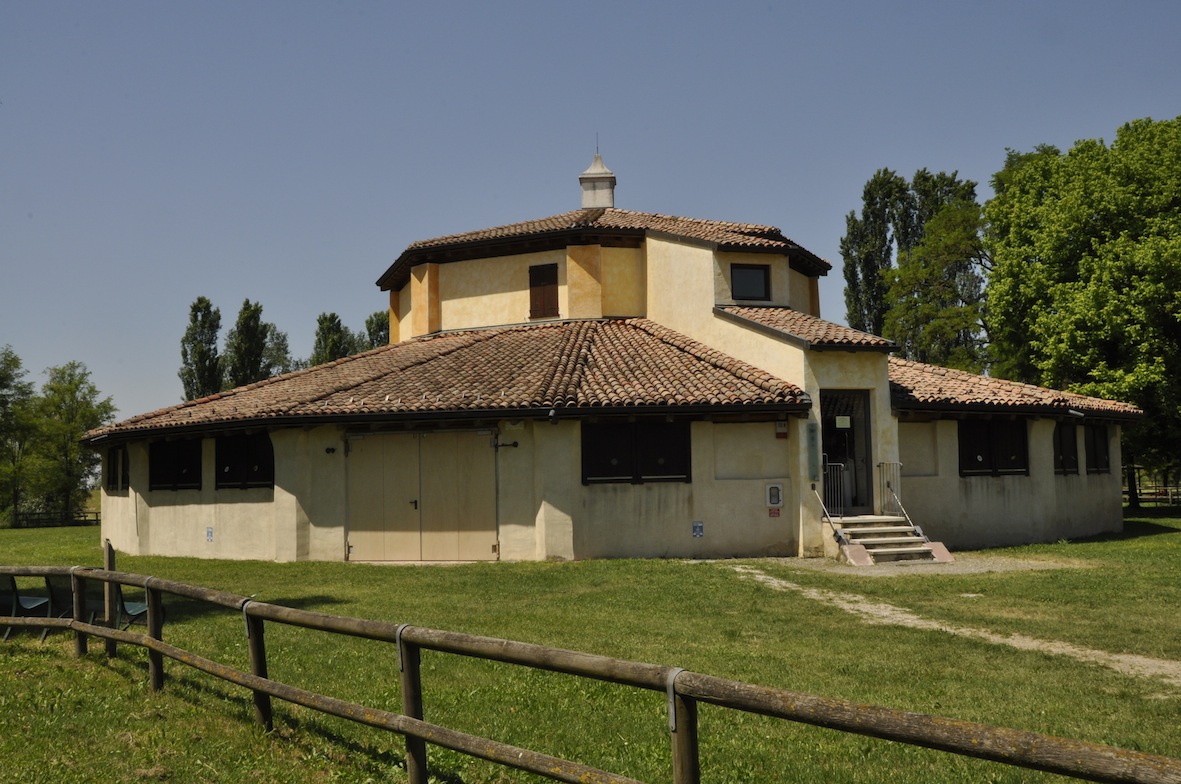 This area is an important example of a landscape created by land reclamation works. Its most remarkable features are a historical canal system and some traditional buildings used for horse raising. The area extends over 942 ha within the municipality of Mirandola. The Valli Le Partite area owes its significance to its being a historical testimony of the ongoing struggle between man and water to free up areas for agriculture; a struggle that has produced a still visible system of canals and banks, as well as buildings and other hydraulic works that have remained a distinctive feature of the local landscape down to the present day. The land reclamation works were carried out in the Middle Ages, when the decision was taken to reclaim areas that would have otherwise remained covered with water almost the year round. Some unusual buildings with a polygonal plan called barchessoni were built in the first half of the nineteenth century to shelter the horses and the workers who took care of them. As regards its integrity, although the present farming system is highly mechanized and hence very different from the historical one, the Valli district still retains some important features of its traditional landscape. Vestiges of the original canal system can still be recognized all over the area, and several traditional buildings still survive, partly thanks to restoration works undertaken over the last few years. As regards vulnerability, as in almost all the Po River plain, the expansion of residential and industrial building threatens to obliterate this landscape, which has maintained some of its distinctive features over time. Further modifications in the local agricultural setup and infrastructure may compromise the persistence of the canal network and other still visible land reclamation works.

2. Olive orchards of the Lamone valley 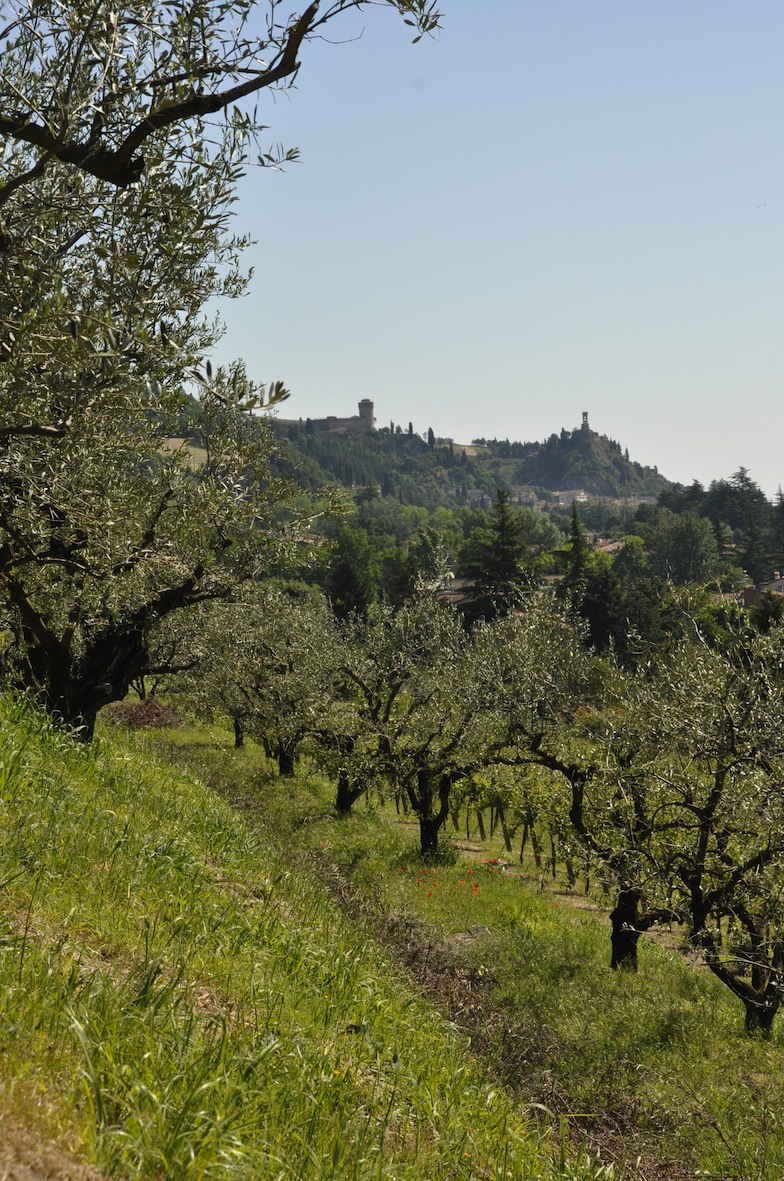 The area presents an agro-forestal mosaic with traditional olive orchards located in the municipality of Brisighella and extends for about 645 ha. The significance of the landscape revolves mostly on the historical presence of traditional olive groves located on the slopes of the hills situated on the left-bank of the Lamone torrent, along with ample areas with vineyards and fruit-orchards, mostly located on the right-bank of the torrent. The medieval town of Brisighella is the most important center in the valley. The area is one of the of most interesting olive areas of northern Italy, as witnessed by the existence of references to Brisighello olive oil dating to the fifteenth century. The small local production is of very high quality and the oil was the first oil in Italy to receive, in 1996, a PDO label. As for its integrity, the landscape has not been yet subject to an excessive intensification of olive farming. The orchards are of variable density and alternate with crops and vineyards that form unusual tapestries of woods and farmland on the slopes of pleasant hills. The hills are characterized by gullies that contrast with the cliffs emerging from the Gypsum Vein that crosses transversally the valley, forming a typically karstic landscape. From the perspective of the vulnerability, the proximity of the Padana plain and the strong development of housing have already partially compromised some of the scenic elements of the valley. Another vulnerability is the strong need for water for the intensive cultivations of kiwi.

3. The Partecipanze of Cento and Pieve di Cento

The partecipanze landscape is one of rural settlements and parceled fields on reclaimed land where one of the last shared ownership systems in Italy still survives. This area, of about 1030 hectares, lies within the municipality of Cento. The landscape owes its significance to the historical persistence of elements such as the parceling of fields, rural settlements of medieval origin, and forms of common ownership, which make the partecipanze a living testimony of the historical landscape of the lower Po River Plain. Following norms that have remained unchanged down to this day, lots are drawn periodically to sort out the collectively owned land among legitimate male descendants of old local families, who are the only ones to have title to it. The system dates back to the early thirteen hundreds, and in 1894 the system was granted official juridical status under the Kingdom of Italy. As regards integrity, some of the principal features of the partecipanze have remained unchanged over the centuries, and still have an important role in the local farming economy and society. There have been changes in the crops grown in the area, notably, a transition from the growing of hemp to increasingly specialized and intensive industrial monocultures, exploiting the land to the maximum of its potential. One of the vulnerabilities of the area is its exposure to the expansion of large industrial complexes, which is transforming the whole area into a continuous peri-urban landscape. Another is the possibility of further changes in crops that could lead to further blotting out of the plots. 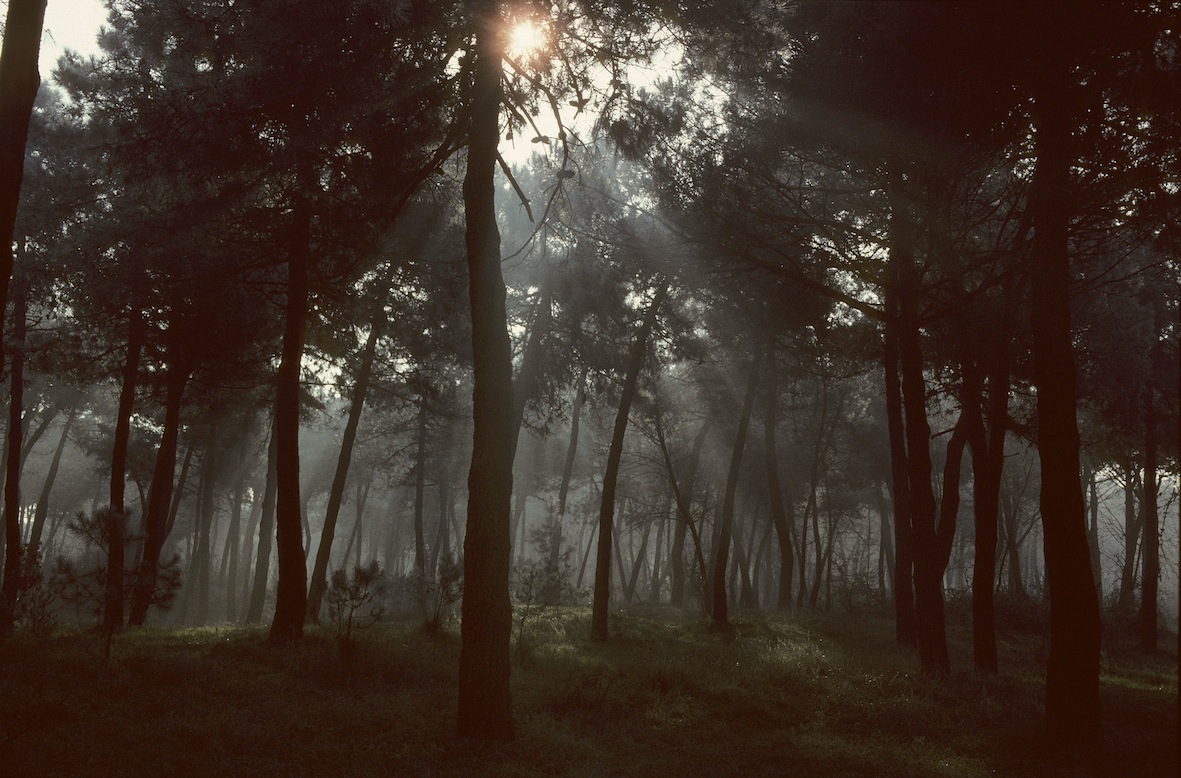 The area in question is a still extant portion of the old Ravenna pinewoods, extending over about 2062 ha in the municipalities of Ravenna. The San Vitale Pinewood lies within the perimeter of the Po Delta Park, a Site of Community Interest and a Special Protection Zone. The area owes its significance to the historical persistency of the umbrella pine woods through many centuries; although their original structure has been altered in many ways, presenting an emblematic case of the difficult relationship between historical forest landscapes and protected areas. This pinewood was part of the ancient pinewoods of Ravenna, which date all the way back to the Roman Imperial period, when they were planted to provide lumber for shipbuilding. After the fall of the Roman Empire, Justinian gave the woods to the Archbishop Agnello. This event marked the beginning of a long-lasting monastic control of all the coastal pinewoods. The integrity of the area shows some contradictory aspects. The umbrella pine (Pinus pinea), with its characteristic umbrella-shaped foliage that leaves ample space underneath it, and thus favors tourist fruition, has been joined by other species, such as pedunculate oak, poplar, ash, and holm oak, as well as dense undergrowth that often hinders transit. Thus, the “pinewoods” are increasingly taking on the character of a mixed wood. Thus, while the woods still retain some of their principal characteristics, their integrity is compromised as regards their specific composition due to the lack of management policies aimed at conserving their historical features. 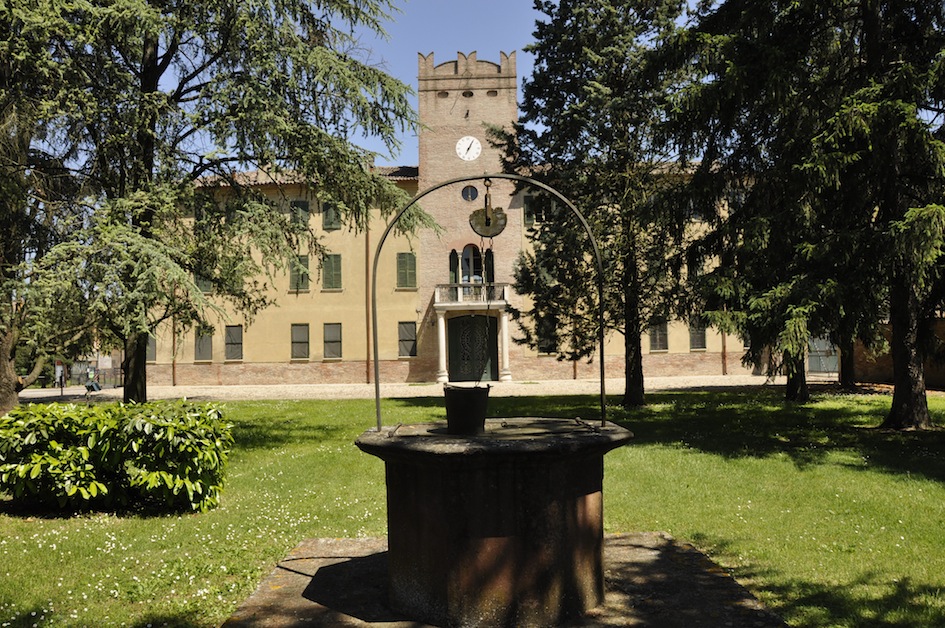 In the countryside around Vigarano Pieve (Municipality of Vigarano Mainarda), a few kilometers west of the town of Ferrara, among ploughed fields and modern specialized fruit orchards, is a group of rural buildings known as the Diamantina, deriving its name from one of the emblems of the House of Este, the diamond. The Diamantina owes its significance to the preservation of its historical rural settlement, which dates back to the late 1400s, when the estate covers 1600 ha. The earliest information about the appearance of a new farming center in the area dates from 1478, when 13 families and 126 individuals were reported to have established themselves on the spot. The area still retains the typical characteristics of reclaimed land modified by man over the centuries by digging canals to second the natural drainage process. The Diamantina estate remained in the hand of the Estes until the mid 1700s, when it was given to the marshal Gianluca Pallavicini, who undertook restoration both of its buildings and its agriculture. In 1870, the estate was incorporated in the property of senator Silvestro Camerini, who resumed land reclamation works and improved on earlier ones, and also built a number of farmhouses. As regards its integrity, the estate presently still displays the typical settlement pattern of the lower Po River plain, with a main building cluster serving as the organizational center and small isolated clusters scattered over the area. Some features of the field layout have remained unaltered over the centuries, in spite of changes both in crops and in farming methods. The area’s vulnerability lies in the possible negative impact of urban residential or industrial building expansion on the settlement structure and its relationship with the surrounding landscape. Besides, further modifications of farming systems may negatively affect the reclaiming works that still define the character of the agrarian landscape.