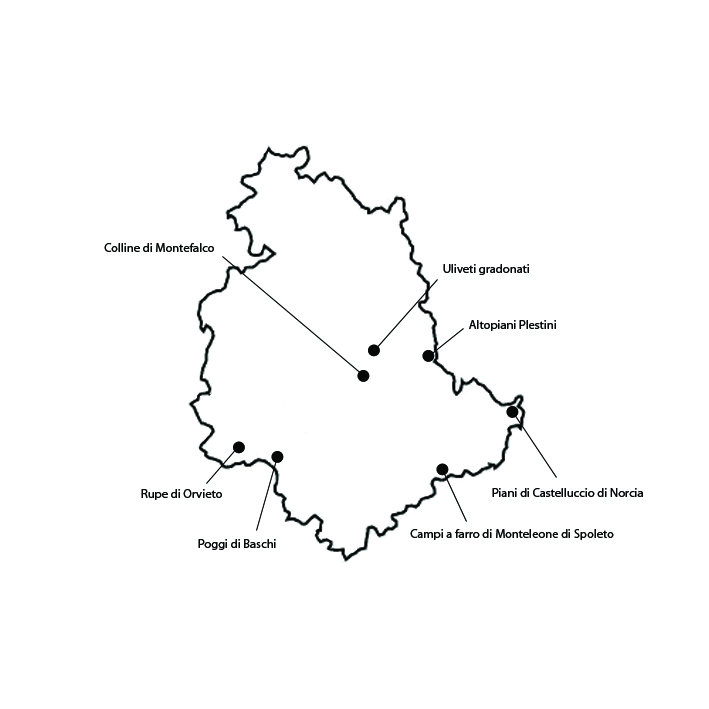 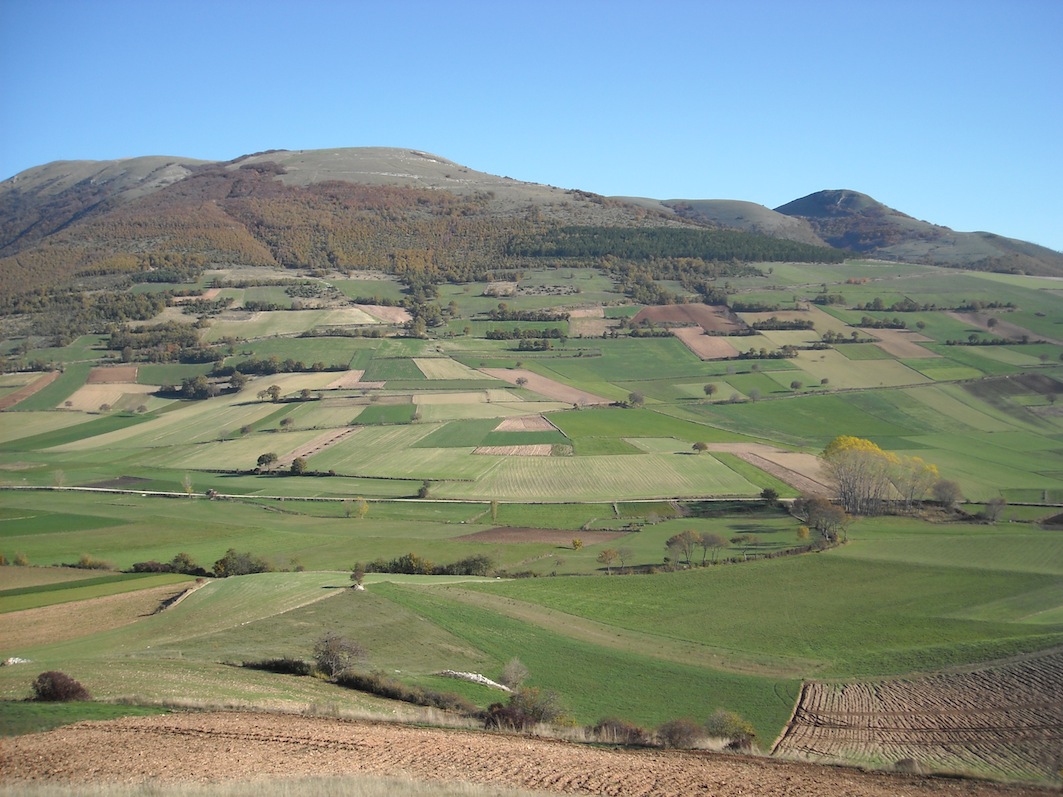 This polyculture landscape extends over 2038 ha in the Colfiorito area, at altitudes between 750 and 800 m a.s.l., in the municipalities of Foligno, Nocera Umbra and Serravalle di Chienti. The area owes its significance to its fascinating landscape, characterized by the persistence of agricultural and forage polycultures with remote historical origins on plateaus lying in a prevalently mountainous district; a landscape that faithfully reflects the history of the pastoral-agricultural cultures of the Apennines. The agrarian landscape is characterized by traditional cultivation of grain and forage, and especially lentil and red potato. Both are included in the list of Traditional Agroalimentary products of the Ministry of Agricultural, Food and Forest Politics. The landscape still retains a certain degree of integrity, although there have recently been some changes in crops. The principal sector of the local agricultural economy is still animal husbandry. Good milk production and commercialization facilities have allowed the survival of many family-owned cattle farms, as well as the creation of larger and more efficient farms.The vulnerability of this historical landscape prevalently resides in the risk that traditional agricultural activities will be abandoned. The shift to specialized crops has partially made up for land abandonment, but low production yields still threaten to cause a large-scale abandonment of this countryside. 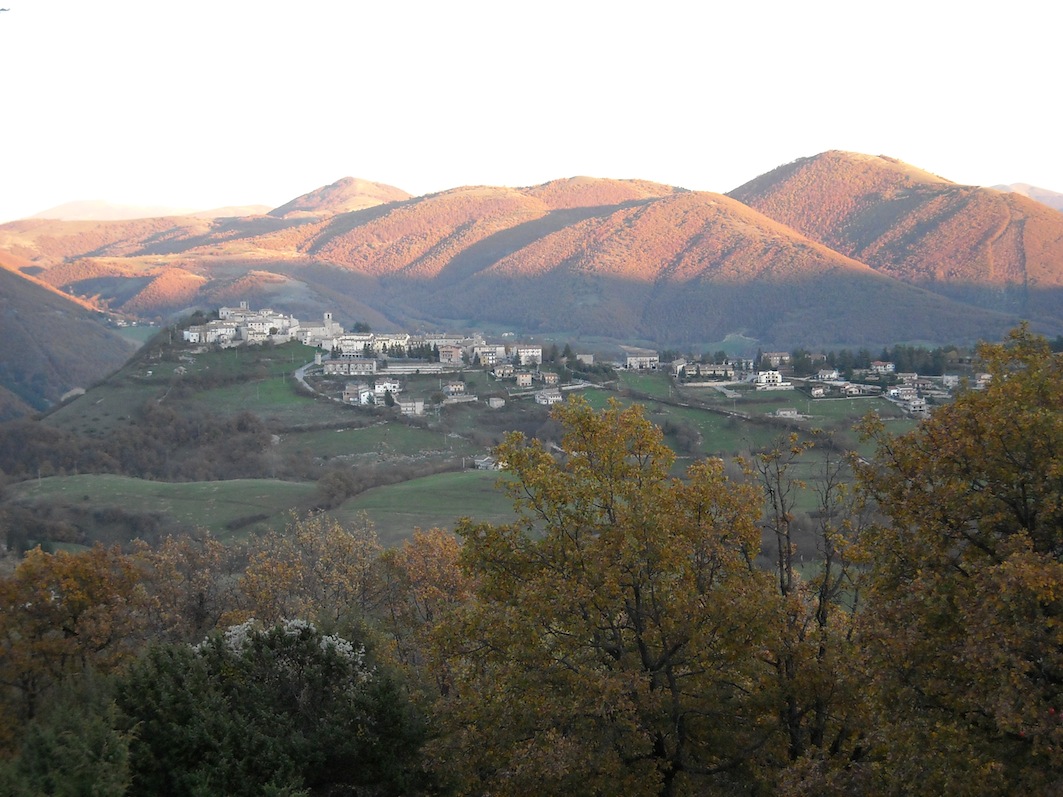 The spelt fields of Monteleone di Spoleto lie in the homonymous municipality, over approximately 1696 ha at altitudes ranging between 700 and 1000 m a.s.l. The local landscape owes its significance to the historical persistence of the cultivation of spelt, which dates all the way back to the Roman period. Monteleone has always been a very important natural intersection of major routes, an Etruscan biga was fortuitously discovered in the area and now it is part of the Metropolitan Museum of New York exhibition. Chemical weeding is never employed in the fields: here spelt is grown according to the principles of biological agriculture. In spite of the limited expanse of farmland, fruit trees such as almonds and walnuts are also grown in the area, as well as herbaceous crops and pulses (beans, chickpeas, broad beans, and chickling vetch). There is also a significant production of black truffles. Because of its mountainous and hilly morphology, the area has always been especially suitable for animal husbandry, an activity in which part of the population is engaged. The integrity of the spelt field landscape is still very good. The fields are still separated just by hedges and trees, no fences. The main vulnerability of the Monteleone landscape is the high average age of farmers. Because of this, there is a real risk that the fields will eventually be abandoned. In spite of the presence of 8 biological farms and 6 being converted to biological methods, there is a strong risk that intensive agriculture will take over, radically changing the landscape.

3. The hills of Montefalco 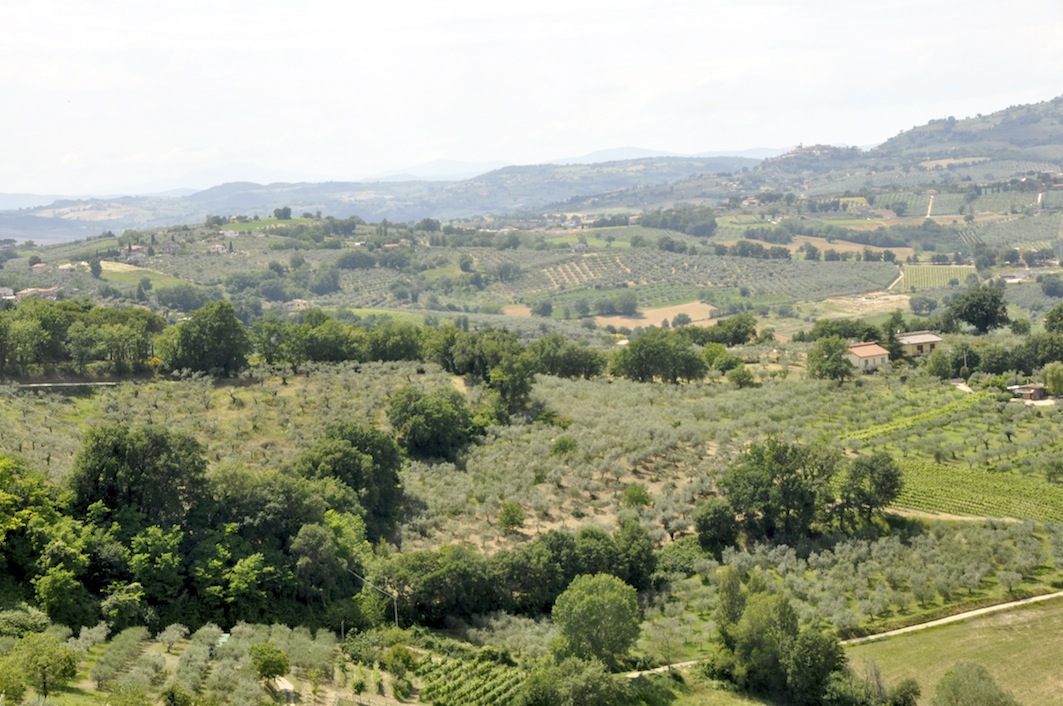 The historical agricultural landscape of the hills of Montefalco extends over 1195 ha around the town of Montefalco. The landscape owes its significance to the historical persistence of an elaborate agroforestal mosaic and high property fragmentation, which have characterized the area, although not always in the same forms, for several centuries. At the edges of woods, olive groves form regular but discontinuous plots near inhabited centers. On cultivated hill slopes one notices reforested patches of cherry trees. To the north, on the hills declining towards the Valle Umbra, vineyards become more frequent. In the local vineyards one of the most prized variety in Italy is grown, the Sagrantino. The area produces several wines, including the DOC (Controlled Origin Denomination) “Colli Martani” and the DOCG (Controlled and Guaranteed Origin Denomination) “Montefalco Sagrantino”, as well as the PDO (Protected Designation of Origin) “Umbria” extra virgin oil. The landscape of the hills of Montefalco is still quite intact, with its diverse mosaic of crops. The main threat to the local landscape, which is characterized by a great variety of its crops, is a trend towards simplification. This is occurring especially as a result of intensification, especially in vineyards, while the olive groves still retain their traditional tree layouts. The growth of wine production has led to the replacement of historical cultivation systems with highly mechanized ones; a problem the area shares with many other Italian wine-growing districts. 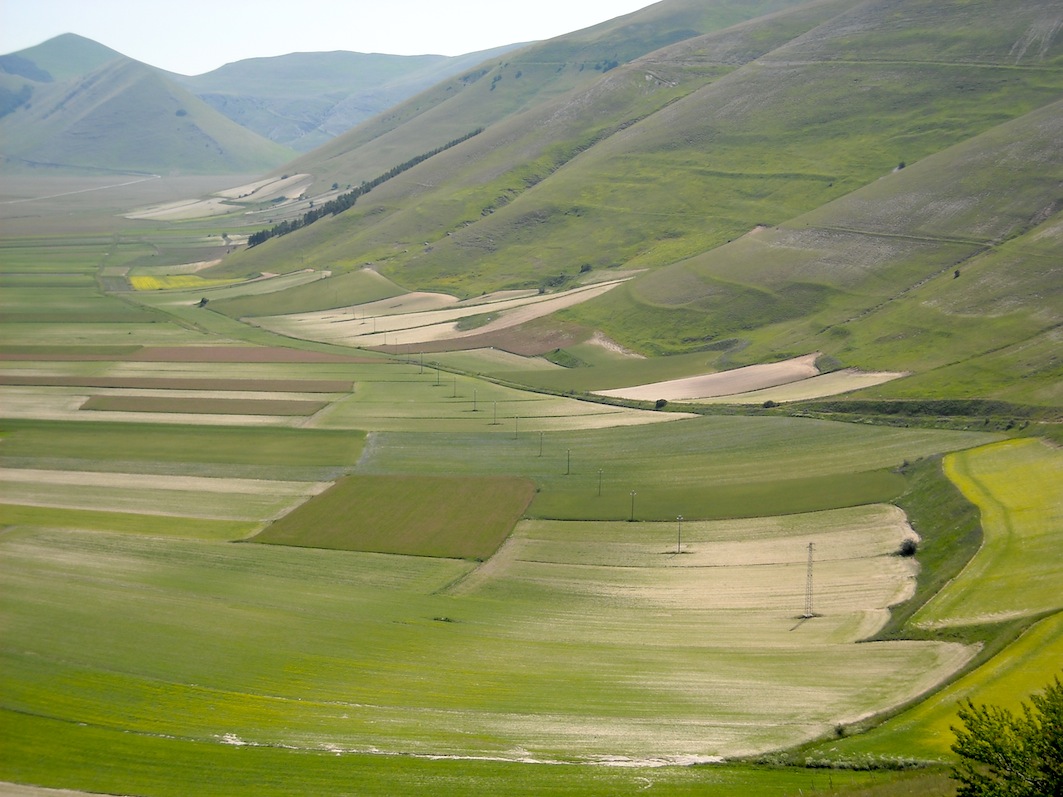 This mainly privately owned pasture and field landscape extends over 1350 ha in the municipalities of Norcia and Castelsantangelo sul Nera. It is partially included within the Monti Sibillini National Park. The area owes its significance to its captivating scenery, made up of calcareous mountains with centuries-old fields and vast pastures. The fields are marked out from one end to the other of the plateaus. They are divided into quarti, cinquine and decine, a system dating back to land parceling carried out in 1346, which involved the whole area, except the bandita and the fida, pasture zones which remained available for common use. There are no fences, hedges, walls, or any other landmark separating the plots. Another aspect that gives the landscape a distinctive quality is its lack of trees, except for some small patches along the mountainsides. The flowering (fiorita) of lentils is a phenomenon of great beauty. The local landscape appears quite intact, retaining all of its denudated allure. The agricultural production of the Castelluccio di Norcia plateaus was once much more diversified. Today lentil, a significant source of income thanks to its PGI designation, has largely replaced most traditional crops. The area derives its vulnerability from several causes. The restrictions imposed by the Monti Sibillini Park to safeguard the area’s magnificent landscape inevitably leads to friction with the few farmers left, who complain of huge difficulties in continuing cultivation. 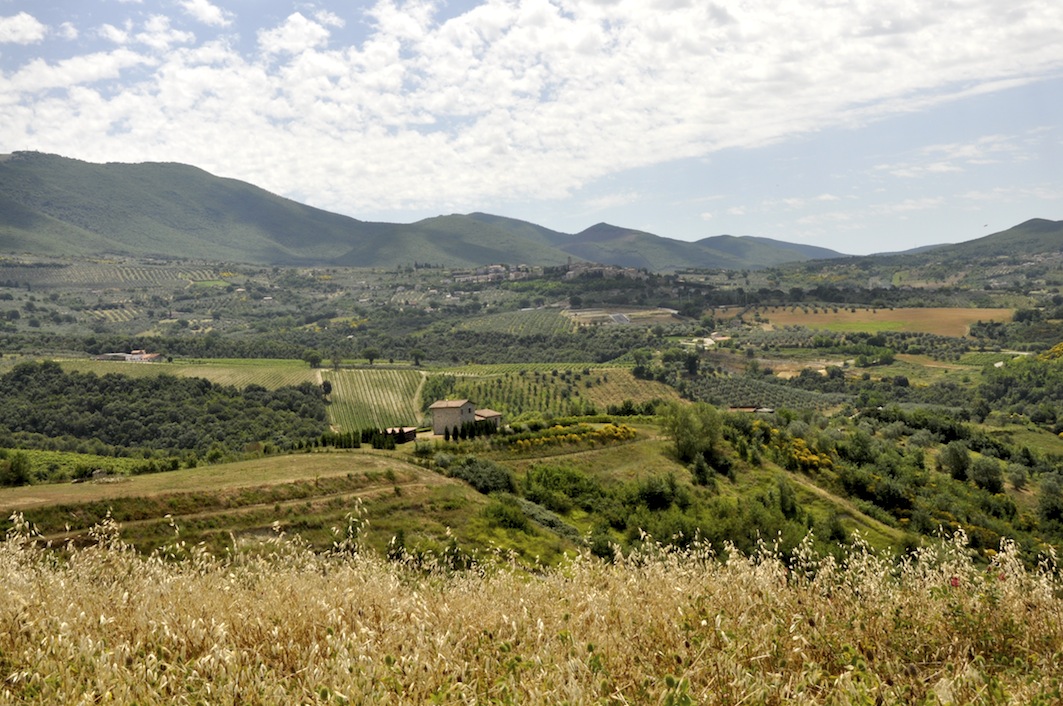 The polycultural landscape of the Poggi di Baschi lies in the municipalities of Baschi and Montecchio, and extends over 2627 ha. The Poggi are a significant fragment of the Umbrian bel paesaggio, formed over the century through the action of man. The landscape is dominated by hill agriculture, with an alternation of herbaceous fields, arables and maquis. The area is remarkable for the antiquity of its wine and olive-growing, as well as that of its small vegetable gardens, and for its old rural buildings, now largely converted into holiday homes or holiday farmhouses. The poggi produce an oil distinguished by the Umbria PDO (Protected Designation of Origin) denomination, remarkable for its quality rather than its quantity. Vines trained on trees have given way to specialized vineyards producing red wines mainly from Cabernet Sauvignon, Merlot, Pinot Nero and Sangiovese grapes. As long as the part-time farming system survives, and as long as the older farmers’ their attachment to the land overweighs other factors, the vulnerability of traditional landscape of the Poggi di Baschi will probably remain low. When these conditions cease to obtain, however, the “abandonment landscape” will encroach – as it has already begun to do – on marginal, no longer cultivated land, and the traditional landscape will hence be lost. Finally, the conversion of old rural buildings to second homes or holiday farmhouses also poses a risk to the landscape, when this is done, as is often the case, without taking care to employ traditional architectural designs and materials.

6. The Rock of Orvieto 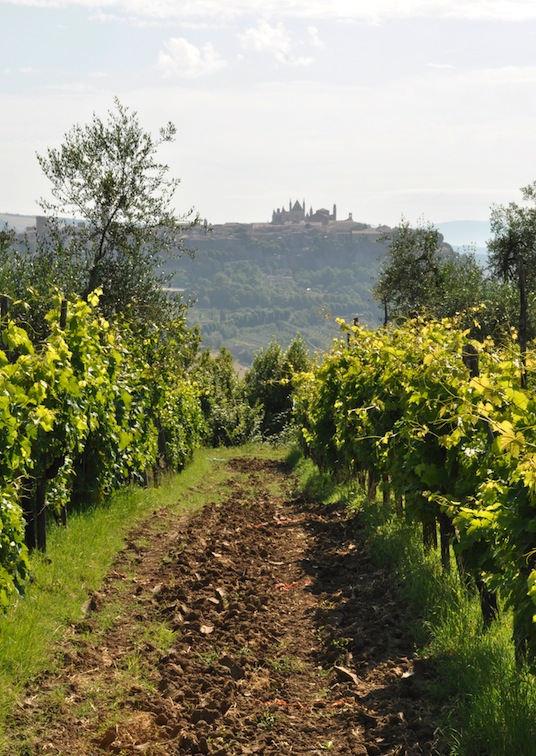 The Rock of Orvieto is located in southern Umbria. The area under consideration here extends over 679 ha. The Orvieto Rock owes its significance to the historical persistence of a high-quality agriculture which, combined with the place’s distinctive morphology, results in a unique and aesthetically remarkable landscape. The local farming landscape is dominated by vineyards yielding quality wine. Indeed, DOC (Controlled Origin Denomination) Orvieto wine is one of the best known Italian wines. The area is especially significant for the harmonious way in which its agrarian landscape evolved, and also for how it managed to preserve its homogeneity in spite of its proximity to such an important urban center. The slopes, with the surrounding valleys and hills, have always been the main resource of Orvieto’s almost exclusively agricultural economy. The landscape still retains its integrity thanks to the persistence of traditional farming. A quality wine production, while it ensures partial protection against abandonment, may also lead to an excessive intensification of farming, compromising a landscape’s integrity. Traditional fruit and vegetables are grown in some plots, especially the smaller ones.As regards vulnerability, the main threat to the traditional landscape of the Orvieto Rock is erosion. This occurs more frequently along slopes that are no longer farmed. Finally, the area’s strong tourist vocation is encouraging the abandonment of rural homes with their land, many of which have been converted into second homes and holiday farmhouses. 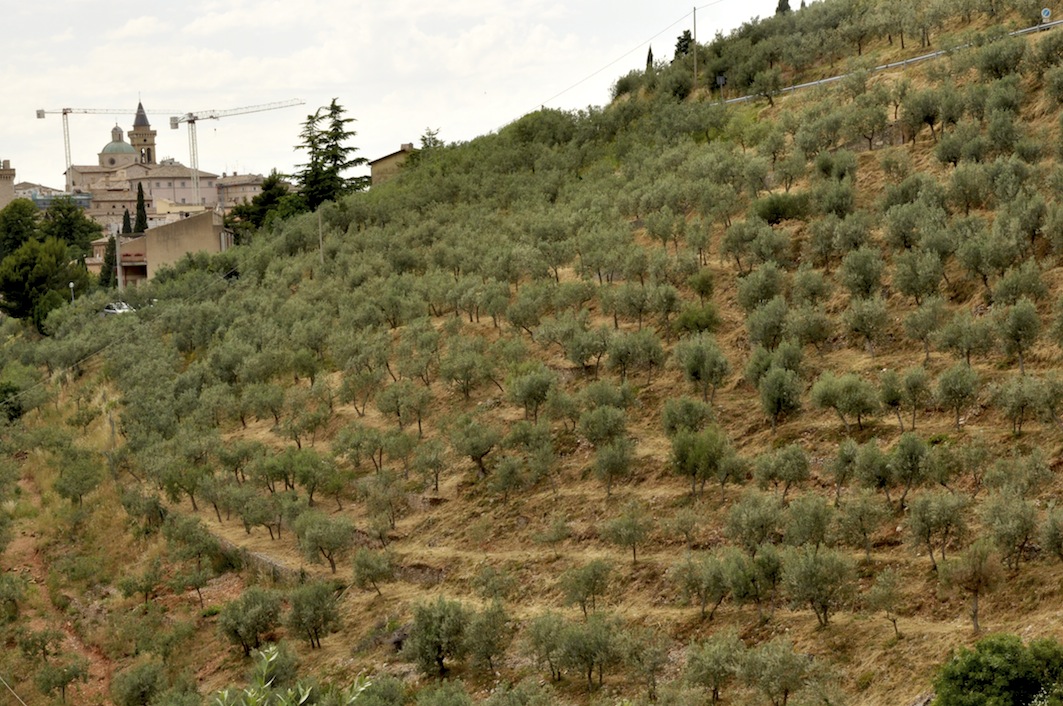 The area between Spello and Spoleto epitomizes the stepped olive grove landscape found along the hilly range between Assisi and Spoleto. It extends over 2286 ha in the municipalities of Spello, Trevi, Spoleto, Assisi. The area owes its significance to the historical persistence of a crop typical for Umbria, which has strongly characterized the whole regional landscape for many centuries, partially thanks to human remodeling of the versants. The landscape is dominated by a continuous strip of olive groves which has been constantly expanding upward from the valley bottom at the expense of the forest. The growing of olive trees on steep terrain is made possible by irregular earth terraces. On especially steep slopes, the usual contour terraces are replaced by terrazzamenti and lunette, made by dry-stone walls. Today, the olive groves produce PDO (Protected Designation of Origin) Umbria extra-virgin oil with the geographic designation “Colli Assisi-Spoleto”. The stepped olive groves are in good condition today, both those with irregular layouts and the centuries-old trees growing on lunette, and continue to produce quality oil. Many of the old rural buildings in the area are still in good condition today, although originally there were a lot more. The olive groves’ vulnerability is due to the threat of radical transformation as a result of conversion to industrial agriculture – which has already occurred in places – and to the abandonment of marginal areas.