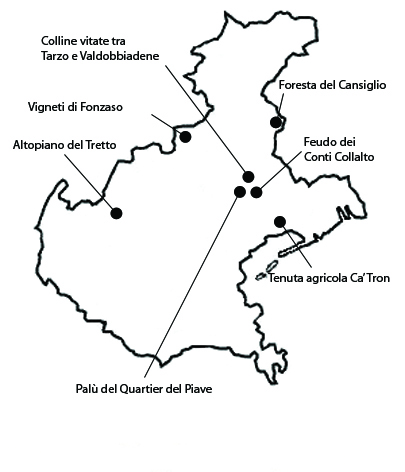 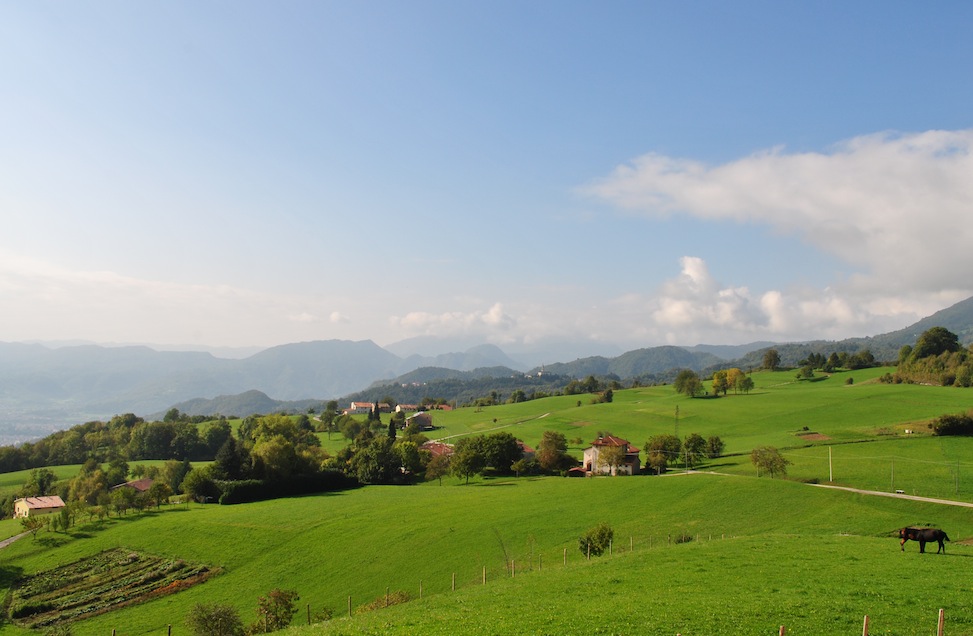 The plateau of Tretto extends for 1453 ha, at altitudes varying between 400 and 900 m a.s.l., in the municipality of Schio and for a very small part to that of Santorso, but up to 1969 it was an independent municipality called Tretto. The plateau is enclosed by high mountains, dotted with small groups of houses around which, for centuries, traditional cultivations have been carried out, while in other areas there are many woods and meadows, once used as pastures. At higher altitudes, the wooded areas consist of coppice woods of beech and black hop hornbeam, and in some cases spruces and larches as a result of reforestation. At lower altitudes, one finds mostly black hop hornbeams in combination with manna ashes and ashes, downy oaks, birches, chestnuts, also maintained as coppice. There are also groups of beeches maintained as tall trees or as part tall trees and part coppice. The presence of fruit-bearing chestnuts represents, along with the network formed by the various localities, an historical testimony of the colonization of the upper-hill area. The territory has basically retained its integrity throughout the centuries and there are few cases of alterations caused by urban expansion, mostly located at lower altitudes. The main vulnerability of the rural landscape of Tretto is the aging and gradual decrease of the population. The land has suffered from lack of maintenance, especially in steeper areas. Some cultivations have been completely abandoned and the areas have turned into meadows.

2. The forest of Cansiglio 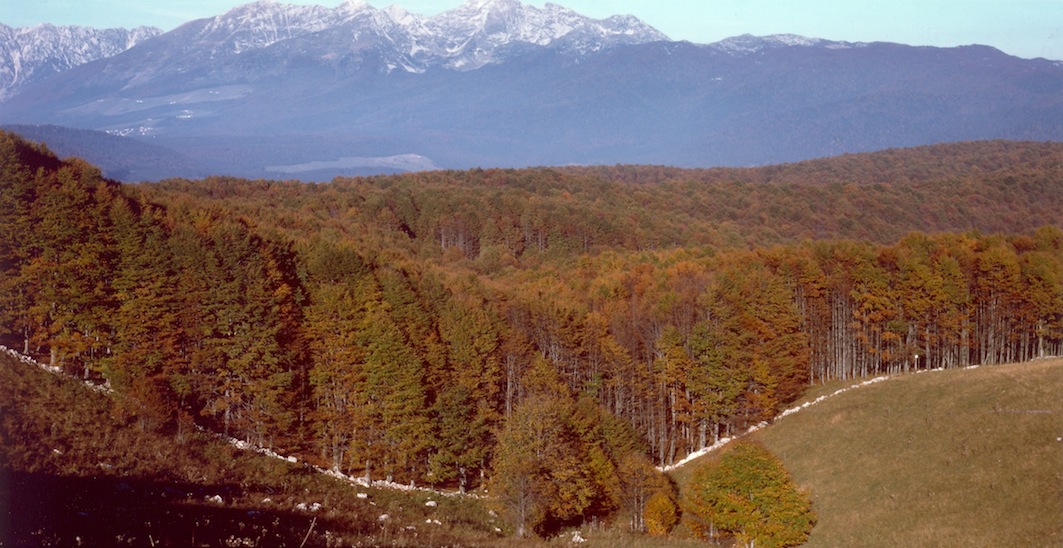 The woods of Cansiglio extend for about 5750 ha in the municipalities of arra d’Alpago, Tambre, Cordignano, Sarmede, Fregona, Budoia, Caneva e Polcenigo. The altitude ranges from 900 to 1500 m a.s.l. The area is particularly significant on account of the historical persistence of the beech wood used by the Republic of Venice for the oars of the galleys used in its military fleet and for the presence of an ancient and particularly varied and complex silvo-pastoral ecosystem. In 1404 the Republic of Venice became the owner and in 1548, chose the woods as its prime bosco da remi (oar woods), forbidding other uses, except for the pastures which remained assigned to private citizens and communities. The area continues to retain its integrity, especially in regards to the beech woods, although the maintenance in the last twenty years has followed naturalistic criteria aiming at their transformation into mixed woods. As far as the vulnerability of the area is concerned, the main problems of the Bosco del Cansiglio derive from the lack of a unitary administration and by the uncertainty on the future of the area.

3. Wine hills between Tarzo and Valdobbiadene 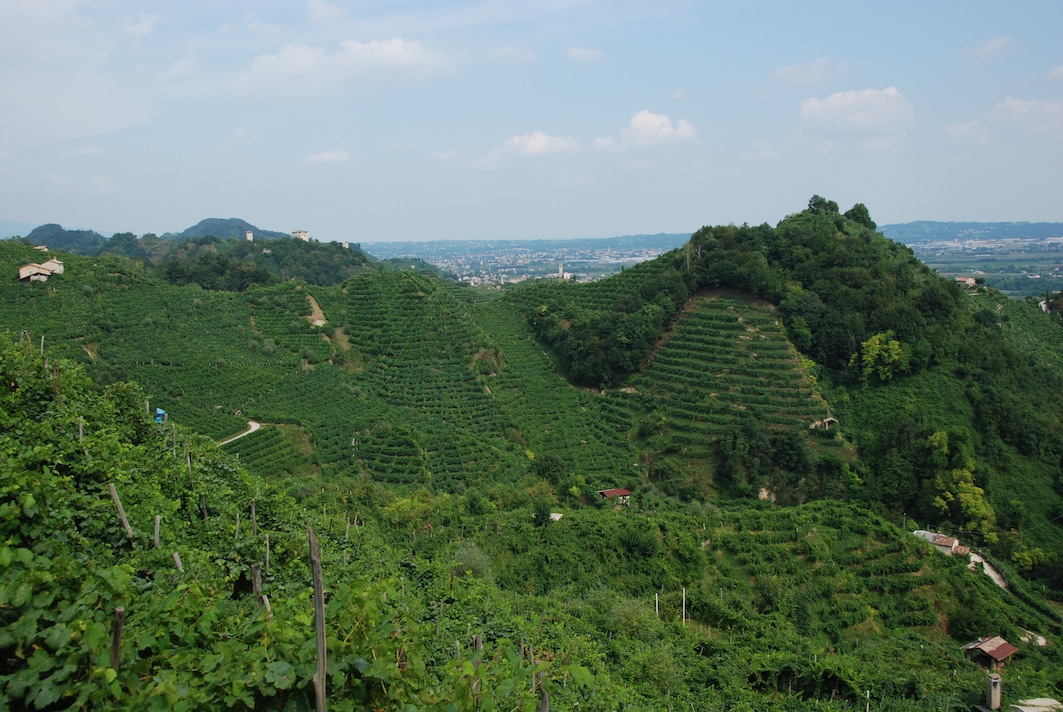 The most ancient and specialized wine area in Veneto is located in the municipalities of Miane, Farra di Soligo, Vidor, and Valdobbiadene, and it extends for about 1152 ha. The area is particularly significant due to the historical persistence of a specialized viticulture dating to the period in which viticulture was still not cultivated intensively. The southern, eastern, and western slopes of the area are nowadays characterized by intensively cultivated vineyards, while the ones facing north are mostly occupied by woods. Vineyards, due to the steepness of the terrain, were cultivated in small terraces with girapoggio ditches and occupied almost all the slopes. The wines of the area are very high quality and include the Prosecco di Conegliano and Valdobbiadene DOCG (Controlled and Guaranteed Origin Denomination), the Prosecco di Valdobbiadene Superiore di Cartizze DOC (Controlled Origin Denomination) and the Colli di Conegliano-Refrontolo DOC. In general the difficult nature of the terrain has helped preserve the traditional landscape, and also the extremely high price of the Prosecco and the Cartizze has encouraged farmers to continue viticulture even where the steepness of the terrain makes it difficult to use modern technologies. There are some vulnerabilities. Some slopes have been excavated and modified to set up vast vineyards more suitable to mechanical agriculture, while in more impervious areas some vineyards have been abandoned. Moreover, the architecture of buildings used for wine-making has largely ignored historical criteria and pastures located at the summit of the hills have been gradually abandoned and recolonized by woods.

4. The fief of the Counts of Collalto 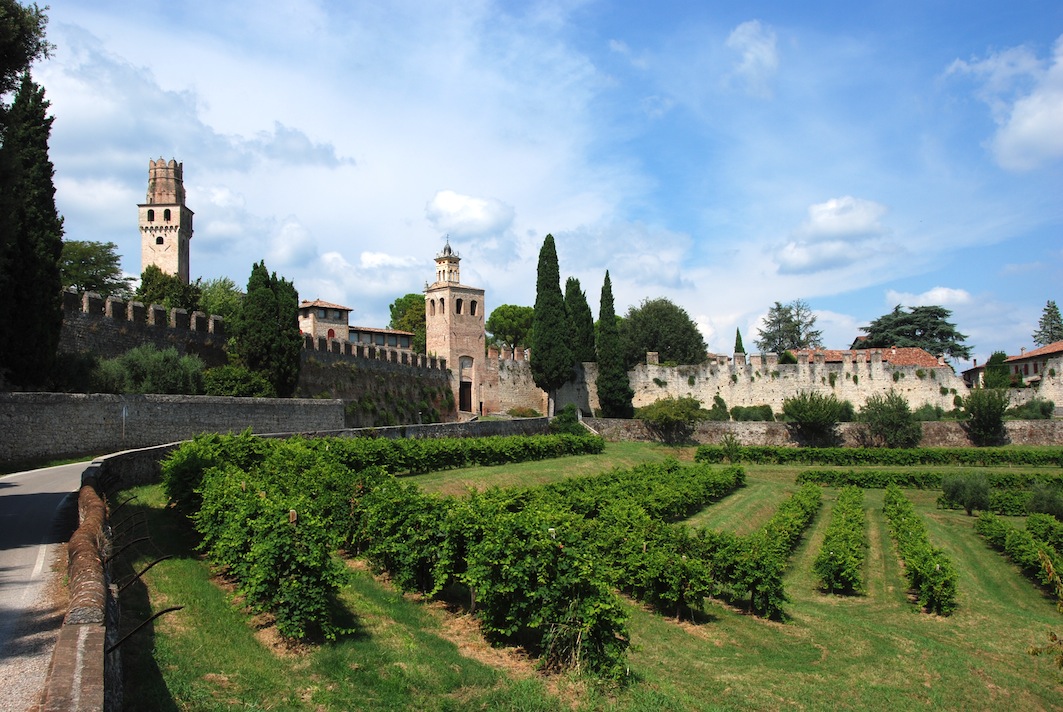 The area in question is an agricultural area belonging to a farm of the Counts of Collalto, with an extension of 1238 ha, located in the municipality of Susegana. The significance of the area is tied to the historical persistence of the castle of San Salvatore and the surrounding cultivations, which together constitute the most interesting aspect of the landscape. The history of the farm begins around the year one thousand, when the founder of the Collalto line, Ramboldo I, obtained from Berengarius II, King of Italy, the town of Lovadina. The integrity of the area, besides the castle and the rural buildings, is also dependent on the agrarian use of the land. The flat area is entirely used for crops, while in the hilly area there are about 135 ha of vineyards, 200 ha of pasture and meadows, and 550 ha of woods. From an historical perspective, besides the integrity of the entire hilly part of the holding, which has basically maintained its traditional layout, an interesting element is the presence of pastures, which are among the few surviving pastures in the lower hills of the Veneto region. The vulnerability of the area is tied to the presence of a few modern buildings that have somewhat altered the traditional aspect of the farm.

5. The palù of Quartier Piave 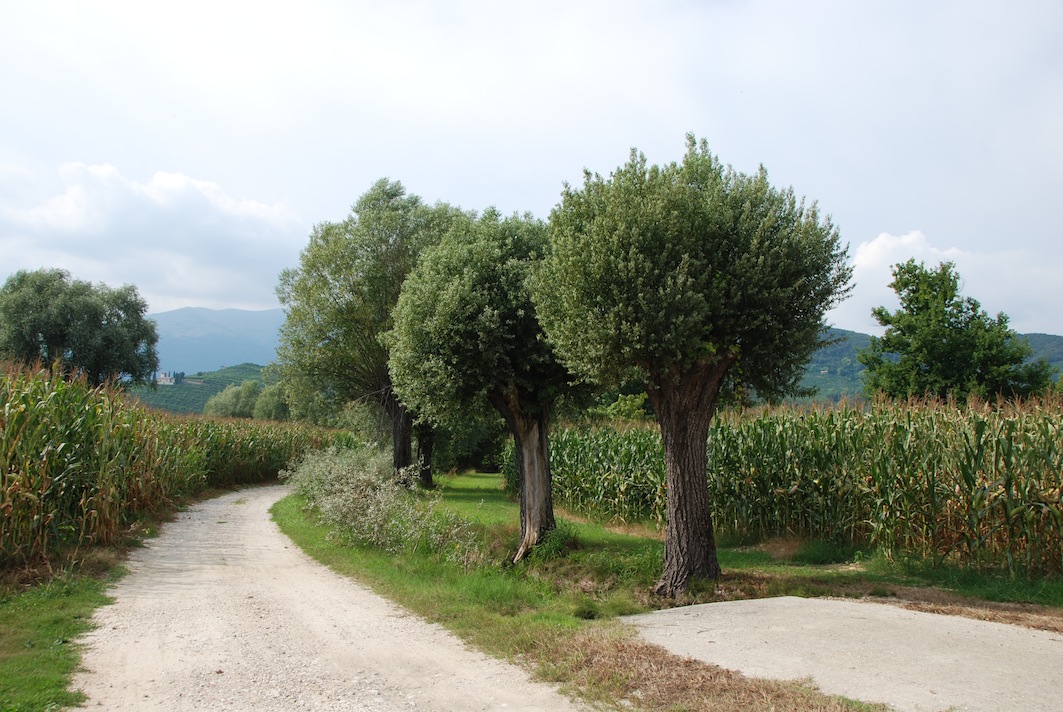 The Palù del Quartier del Piave area extends for 867 ha in the municipalities of Moriago della Battaglia, Sernaglia della Battaglia, Farra di Soligo. The significance of the area is tied to the presence of an historical landscape created by reclamation work carried out many centuries ago, consisting in a series of small meadows bordered by hedges and a network of small draining canals. Around 1100, the monks of the nearby Abbey of Vidor, began draining the land in order to make the marshy land cultivatable. The integrity of the land is high only in small sections of the original historical landscape. The inclusion of this area in our catalog aims therefore at protecting the residual elements of what was once a much vaster landscape. However, after the territorial plan of the Veneto Region stated the need to protect the area, the local population has become aware of its historical and cultural importance and has taken measures to protect it. Environmental associations offer guided tours of the area, which has also been included in the Natura 2000 network allowing more active protection measures to be taken. The integrity of the area had been damaged by urban and industrial expansion, and by the construction of scattered modern style rural houses and animal farms of industrial character. But the greatest present problem is the abandoning of traditional agriculture, and in particular the abandoning of animal farming which in turn causes the abandoning of cultivations and the degradation of the historical landscape. 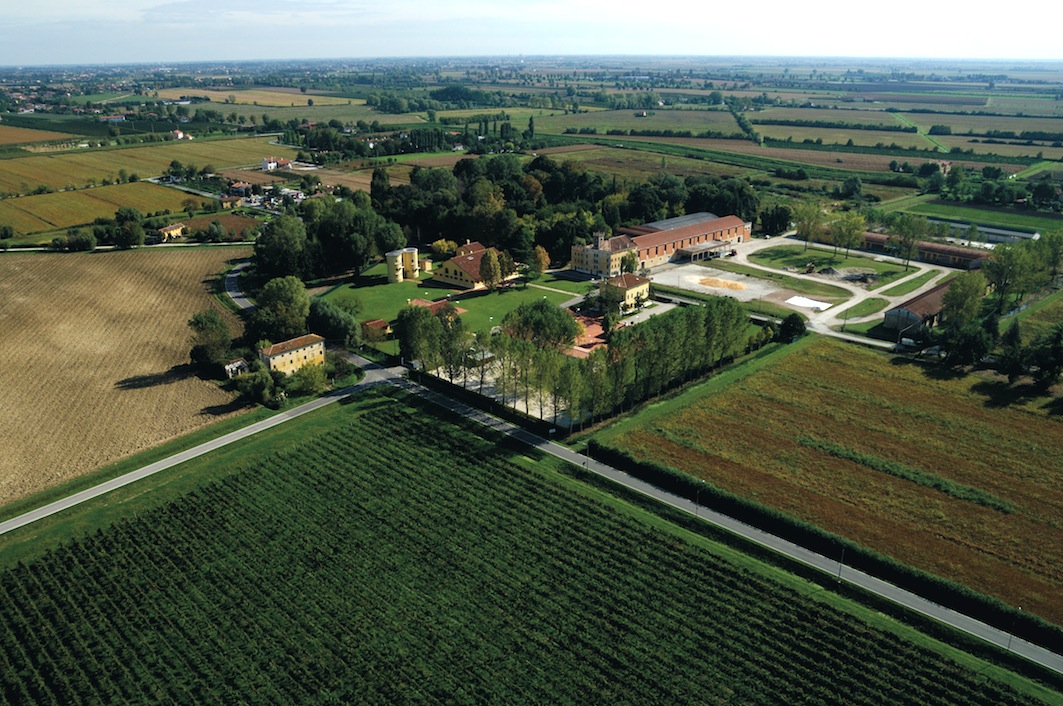 The area surrounding the Ca’ Tron farm has an extension of about 1247 ha and is located in the municipality of Roncade, with the exception of a small portion in the neighboring municipality of Meolo. The area is significant as an example of an historical holding situated on reclaimed land, in which human presence dates back to the Roman period. Since 2000, the area is managed by the Fondazione Cassamarca, a foundation dedicated to promoting economic and social development, which has started various activities aimed at promoting the area, including the historical and cultural promotion of the holding. Presently there are 500 ha of soy, 100 ha of corn, 100 ha of wheat and alfalfa, 70 ha of vineyard, 25 ha of woods and 90 ha of crops. The new 30 ha vineyard planted in 2002, is an experimental vineyard, which employs various types of vine and is available for study purposes. Among the various agricultural activities, of particular interest is the farming of a local varieties of geese, ducks and chicken, and the production of traditional Bianco Perla corn. The latter is on the list of the Slow Food association and is also listed by the Italian Ministry of Agriculture as Traditional Food Products. As for the integrity of the area, the distance from major roads and the presence of the Sile river to the south has kept in check the demand for residential and industrial buildings of the nearby town of Quarto d’Altino. The rural buildings are of particular interest due to their architectural characteristics and their position. The buildings that date to the first phase of the reclamation (end of the eighteenth century). The only negative element is the few houses recently built near the church: it is however a limited phenomenon that does not have a significant impact on the scenery.

The vineyard area is located in the municipalities of Fonzaso and Arsiè, and extends for 539 ha. The significance of the area is tied to the persistence of historical viticolture, often based on traditional vines. Besides the terracing work done on the slopes, another important historical factor is the preservation of local vine types, which have recently been rediscovered, such as the bianchetta gentile, cirnesera, grassella, rossarda, pavana, grinta, clinton. Another characteristic element is the variety of vineyard types. There include vineyards in which vines are supported by wooden posts, by trees (locally named altaii), pergolas, and vineyards planted in pastures. The integrity of the historical landscape has been greatly reduced in the period after WWII. The reason has been the emigration and abandoning of agriculture. This problem was compounded by the spread of phylloxera and other pathologies that attacked the vineyards.