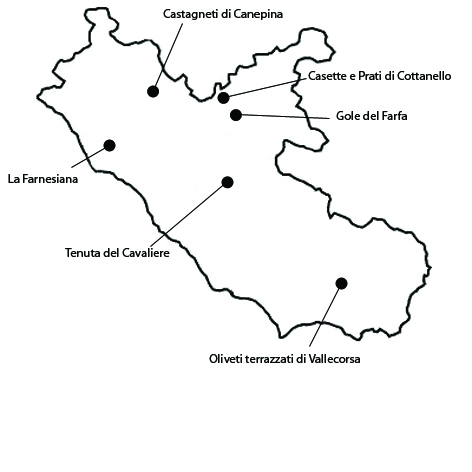 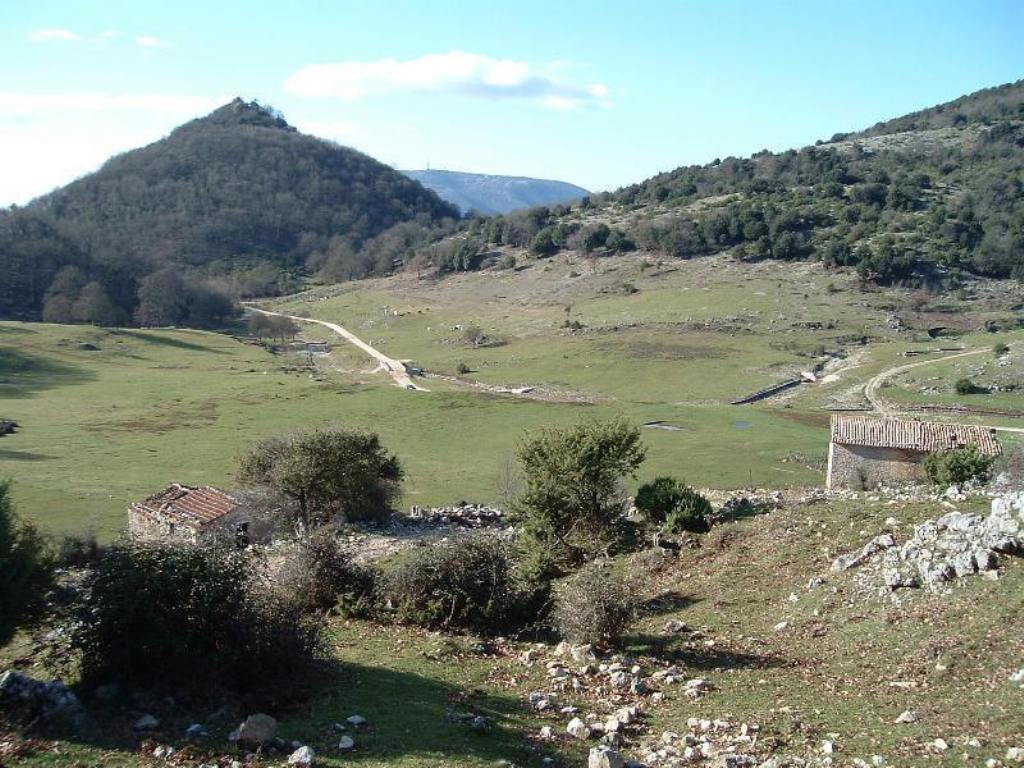 The area called the Prati of Cottanello occupies about 740 ha within the municipality of Cottanello. It is particularly significant on account of the historical persistence of a landscape characterized by the alternation of pastures and woods, an encounter between human presence and natural environment, and is endowed with elements of great historical, productive and environmental value. Pastures are used for many varieties of animals: horses, cows, sheep and goats and often free ranging pigs. Cultivations, consisting mainly of olives and wine-grapes, are found in the proximity of the town of Cottanello. As for woods, the holm oak is the main tree of the area, but chestnuts, oaks, downy oaks, beeches and Turkey oaks are also present. The integrity of the area is a result of its use for extensive pasture and of the continuing interaction of humans and nature, which has created a significant scenery from an historical and environmental perspective. Rural settlings have been only partially affected by the modernization of industrial animal breeding of the second half of the twentieth century, in regards to machinery, structures and the organization of animal-breeding and the work of breeders has remained a synthesis of modern and ancient. The vulnerability of the area is tied to the advance of the woods on abandoned pastures and to the fact that some of the stone buildings are nowadays in bad condition and liable to collapse. This is partly the result of the depopulation of the area, which occurred in the second half of the twentieth century.

2. The chestnut groves of Canepina 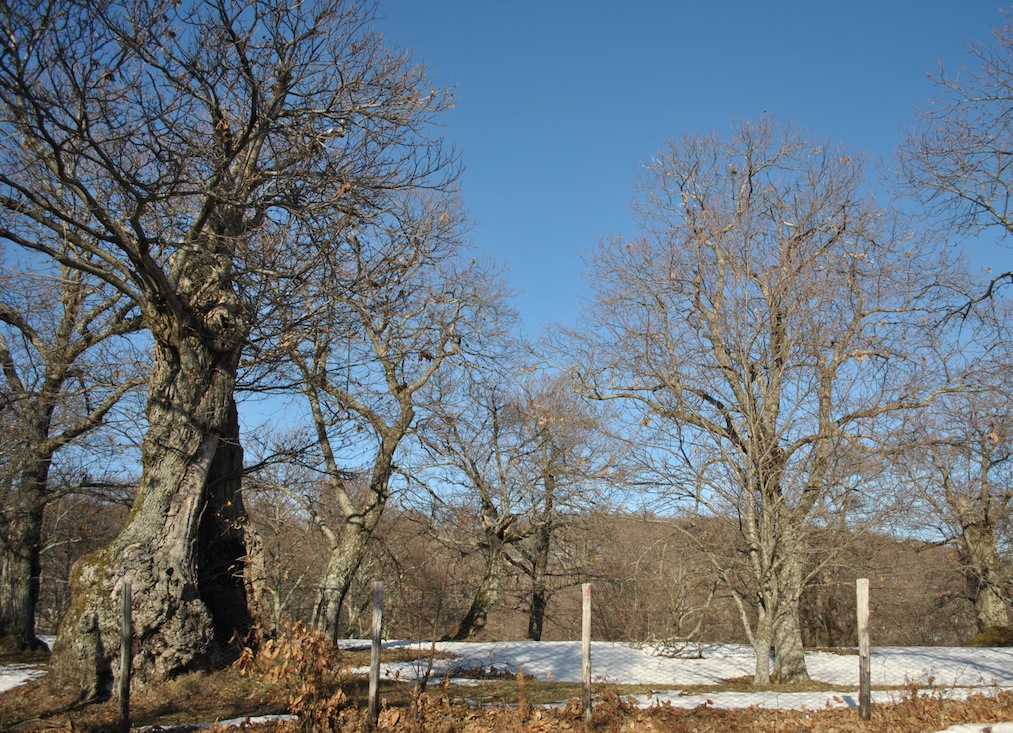 The chestnuts of Canepina extend for about 1706 ha mainly in the municipality of Canepina, and in parts of the nearby municipalities of Vallerano, Caprarola, Viterbo e Soriano nel Cimino. The significance of the area is due to the historical persistence of chestnut grove, a type of woods that for centuries was the economic and nutritional basis of the populations of the Apennines. For centuries they were exsiccated, boiled or made into flour for bread, replacing up to the post-WWII period the role of other cereals in the diet of farm-owners and sharecroppers. Chestnut trees were grown both as high forest for the production of chestnuts, and as coppice for the production of wood. The wood of the chestnut trees supported a long tradition of barrel making by local artisans, active in Canepina up to a few decades ago. Sheep were commonly allowed to graze in the orchards used for producing chestnuts. Grazing served to keep the undergrowth to a minimum, making it easier to pick up the chestnuts. The cultivation of chestnuts became less profitable in the 1950s and 1960s, when the fruit market crashed due to changes in taste and eating habits. In the last few years, chestnut cultivation is again on the rise, thanks also to the institution of the PDO label “Castagna dei Monti Cimini”. The chestnut orchards of Canepina are in good condition, having survived the attack of parasites and the changes in the rural economy of the area. About 60-70% of the holdings are of small size (1.5-5 ha) and the remaining 30-40% is between 5 and 20 ha. Mentioned should also be made of the marked tendency towards organic agriculture by local producers. Unfortunately, chestnut trees of notable size have become increasingly rare and tend to fall victim to various diseases. Sheep no longer graze under the chestnuts which are instead periodically mowed. Chestnut gathering has been almost entirely mechanized, while manual gathering is only done on the steeper terrains. 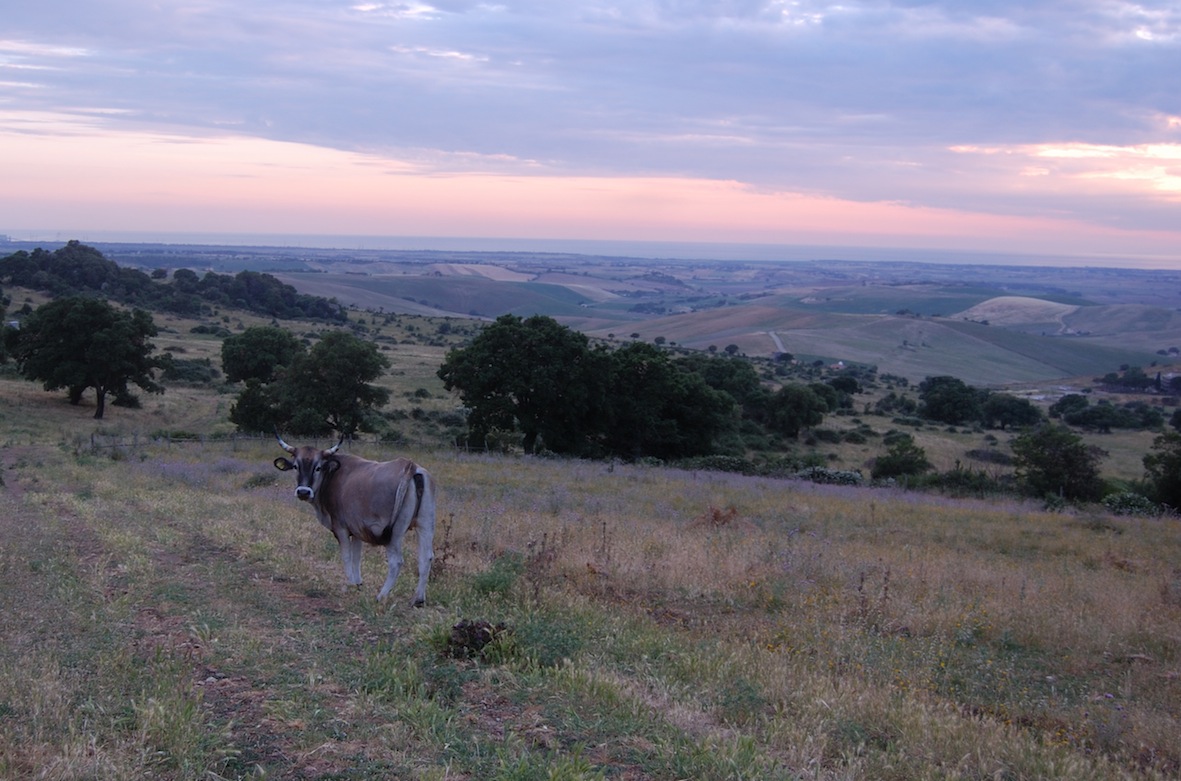 The landscape surrounding the Tenuta della Farnesiana occupies a surface of about 1028 ha on the north-western slopes of the Monti della Tolfa, in the municipalities of Allumiere and Tarquinia. The significance of the area is due to the historical persistence of the landscape, dating back to the medieval period, which synthesizes in a few hundred hectares the salient traits of the areas of the Maremma Laziale and of the Monti della Tolfa, where open range animal farming is still practiced. The landscape of the Farnesiana is characterized by a balance and integration between the role of pasture, crops and woods in the economy of the holding. The cattle of the maremmana variety have become perfectly adapted to this mixed environment. This species is particularly strong: it tolerates climatic difficulties and adapts well to marginal terrains and low-quality forage. Today, the Tenuta della Farnesiana hosts a farm which besides functioning as a tourist farmhouse continues to produce traditional food products, including beef and pork meat, vegetables, wine, olive oil, and fruit. About half of the surface of the farm is covered by Mediterranean scrub and by mixed oak woods, with a prevalence of Turkish oaks and holm oaks; on the south-western slope there are also about twenty hectares of cork oaks. Both the mixed oak woods and the cork oak woods are regularly maintained. The integrity of the area is ensured by the balance between cultivated areas, pasture and woods, which are regularly used. The agriculture practiced at the Farnesiana shows a high degree of integration between cattle breeding, cultivations and forestry, in contrast with the modern trend towards a clear-cut separation between woods and agriculture. Inside the holding there are no notable vulnerabilities.

4. Gorges of the Farfa 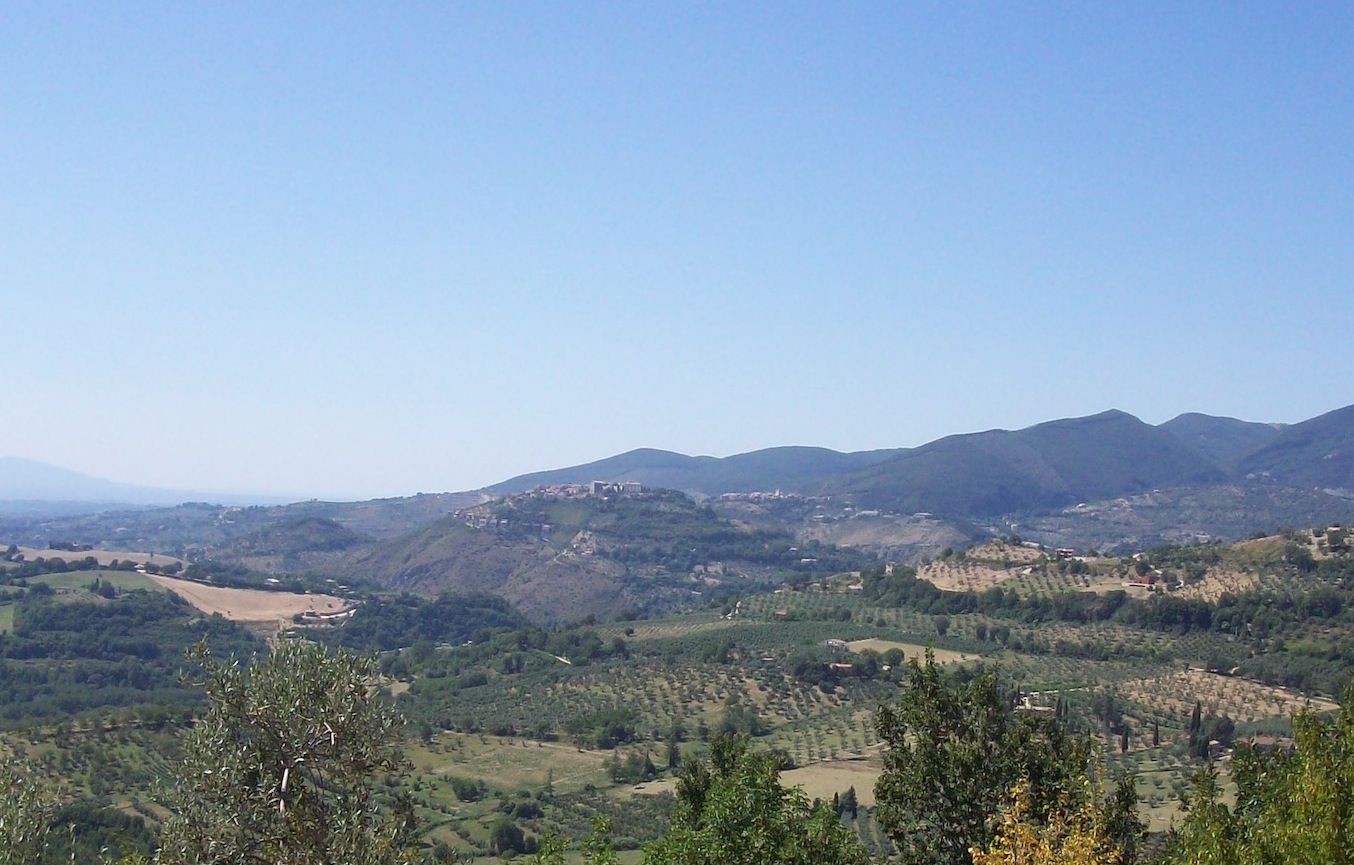 The area of the gorges of the Farfa river is characterized by the presence of olive orchards, and it extends for about 1283 ha in the municipalities of Mompeo, Castelnuovo di Farfa, Salisano, Casaprota e Poggio Nativo. The significance of the landscape of the Gole del Farfa is tied to the millenarian persistence of traditional olive orchards combined with grassland, cultivated even on steep terrain thanks to the use of the ‘lunette’ (small semi-circular containing walls), which support small terraces, thus characteristically modeling the slopes and creating, along with the archeological remains, the wooded gorges and the river, a rural mosaic of great scenic, cultural and natural importance. The cultivation of the olive-tree, practiced in the Sabina area already in the Roman period, has been a unifying feature of the rural landscape. In recent years, a few cooperatives of young people have rented marginal or abandoned olive orchards, combining farming with excursions for tourists and didactic activities in the more picturesque areas of the Gole and in the archeological sites associated with olive-oil culture. The integrity of the landscape is basically due to the preservation of the olive orchards, notwithstanding the increasingly old average age of the farmers and the high costs of workforce, due to the steepness of the terrain and the ensuing difficulty to use modern machinery. The vulnerability of the area is associated with the abandoning of agriculture, presently limited to marginal olive orchards and those located on steeper terrains, which are difficult to mechanize. But what has declined the most and is on the verge of disappearing for good, is the traditional pasturing of sheep in olive orchards. 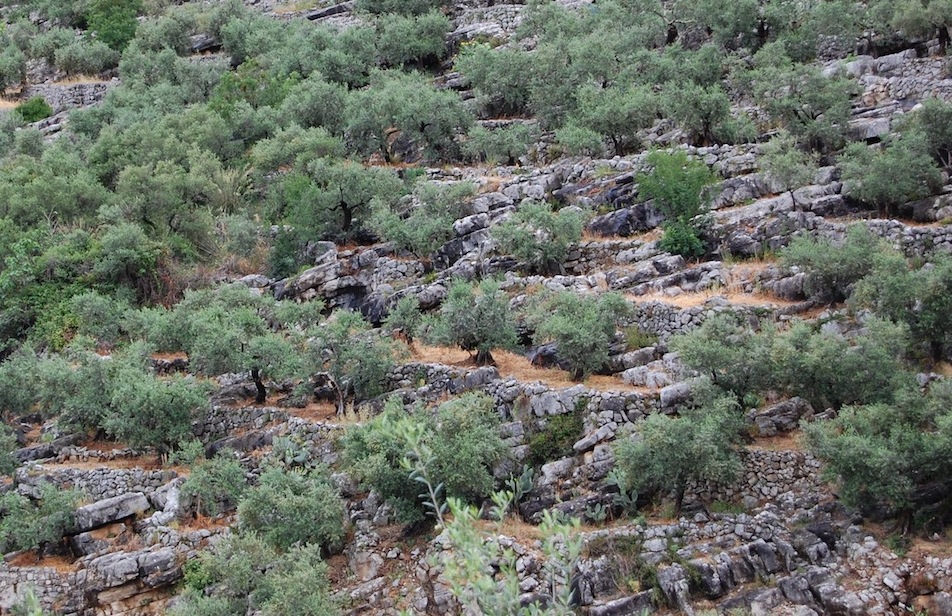 The area consists of a series of terraced olive orchards extending for about 1314 ha, obtained by excavating calcareous rock. It is located in the municipalities of Vallecorsa and of Castro dei Volsci. The significance of the area lies in its traditional historical features and in the beauty of its “rocky scenery”, where the natural karstic modeling of limestone outcroppings has been exploited and refined by farmers to make room for olive orchards. These aspects are part of a general rural landscape of great beauty characterized by the historical persistence of cultivations. Using sledge-hammers, farmers broke up the boulders and used them to create countless dry-stone walls to protect their sheep and their fields, to build wells, reservoirs, and houses, but especially to support the terraces on which olive orchards were planted. The scenery retains a high degree of integrity and is of great interest, not solely on account of the traditional olive orchards, but also of other cultivations and pastures located on the mountain slopes, which enrich and vary the scenery. The sunny and rocky slopes of the mountains of Vallecorsa are still dotted by two million cubic meters of terraces. While there no longer are teams of workers to maintain the walls, and olives belong to small properties cultivated owners as a hobby more than for profit, olive orchards still extend for about 600 ha, almost the same surface of 1907. One vulnerability is a consequence of the disappearance of sheep farming. Traditionally, sheep slept under the olive trees and provided manure, while nowadays chemical fertilizers have been adopted as well as herbicides to clear weeds. The greatest risk is that this form of cultivation be definitely lost due to the abandoning of agriculture by the local population. Besides the loss of an incredible landscape, this would also lead to significant hydro-geological problems.

The landscape characterizing the area of the Cavaliere estate (Tenuta del Cavaliere) is typical of extensive agriculture. The area extends for about 140 ha, in the municipality of Rome. The significance of the area is due to the historical persistence of a landscape typical, in the modern age, of the extensive agriculture of the Agro Romano, i.e. the countryside around Rome, owned by noble families or religious bodies and characterized by wheat and forage cultivation and animal farming. The name Tenuta del Cavaliere dates to the seventeenth century, when the three holdings of Casale Nuovo, La Cementara and Palazzetto were unified by the family De Militibus-Cavalieri. The ancient farmhouse has been built around a defense tower, and is the interesting result of various architectural stratifications and phases in the administration of the holding. It continued, however, to be an agricultural area. Since the 1970s, near the borders of the Tenuta, the Roman neighborhoods of Lunghezza, Lunghezzina, Castelverde, Case Rosse and Setteville have developed. The gradual urbanization of these areas has steadily increased the importance of the Tenuta as a natural and agricultural area. In the 1990s, a reforestation program has been carried out in marginal areas of the Tenuta, for a total of 25 ha, with the planting of pines, holm-oaks, apple-trees, walnut-trees, and oaks. A program of organic agriculture has also been started. The Tenuta del Cavaliere, unlike many other areas of the Roman countryside, has maintained to a large extent its integrity. The Tenuta is periodically opened to the public for recreational and cultural events. The quality of its food products, the beauty of the landscape, and its initiatives aimed at rediscovering the historical heritage of the Roman countryside, make it an outstanding example of multifunctional agriculture. The vulnerability of the Tenuta is caused by the growth of surrounding urban areas, against which it has plays a fundamental role in safeguarding the landscape and the environment.