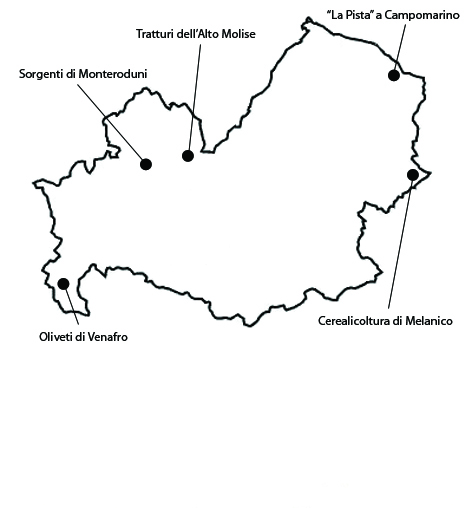 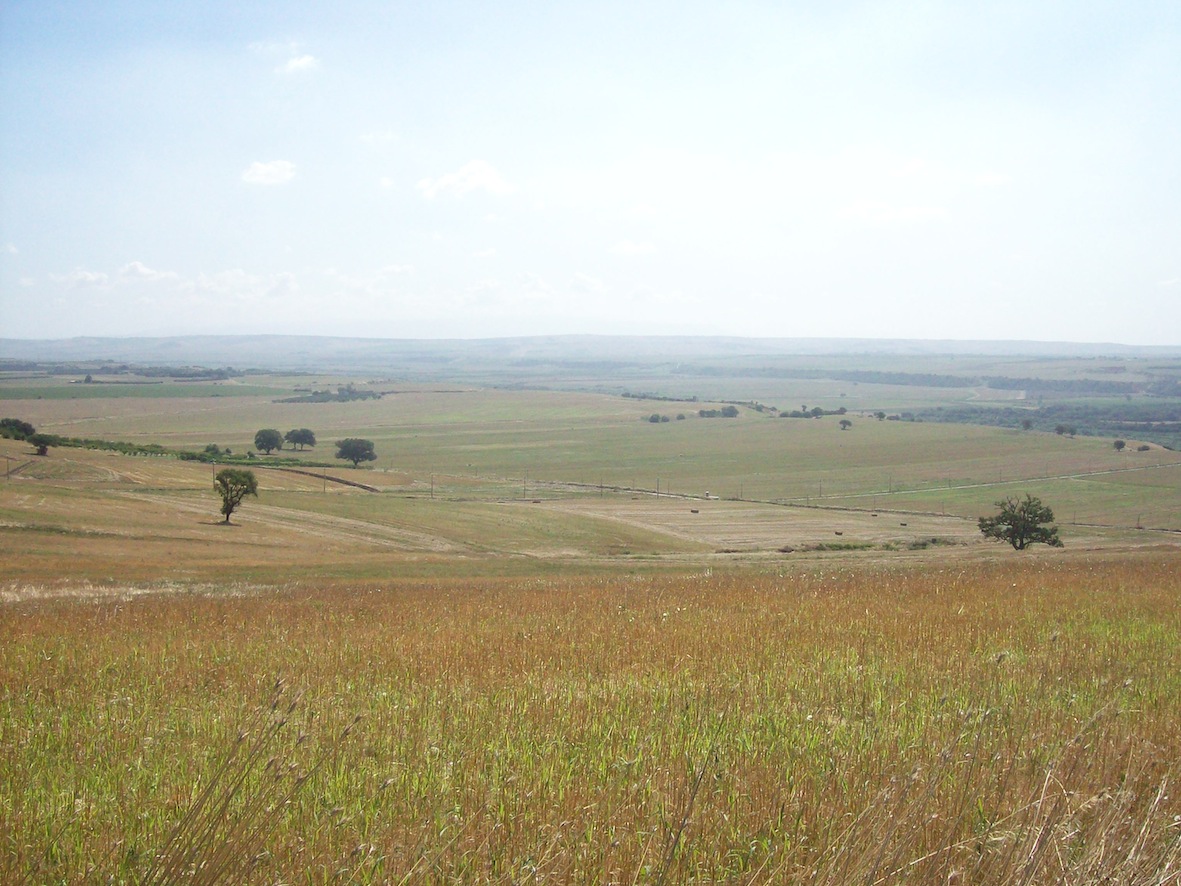 “The granary of Molise” is the traditional nickname of the area of about 2304 ha near the locality o Melanico, within the municipality of Santa Croce di Magliano. The area is characterized by historical presence of extensive cereal cultivations, still largely dominant compared to forage and vegetables. The century-old tradition of cereal farming has left its mark on the landscape, which is characterized by large open spaces and enriched, starting from the 1950s, by the presence of small olive orchards. The landscape too changed on account of the Land Reform, which caused the lands of Melanico to be subdivided into 28 holdings of 6-8 ha, on each one of which a red-brick rural house was built. Notwithstanding the fragmentation of the property, the cultivation of cereals continued, though integrated by small olive orchards and vegetable gardens in the proximity of the houses. The rest of the land, consisting in over 700 ha, remained instead the property of the old owner. The landscape of Melanico is still rather homogeneous, well maintained and characterized by the cultivation of durum wheat and, to a lesser degree, tomatoes and sugar-beets. The vulnerability of the area consists in the danger of further subdivision of the land. Further fragmentation could make agriculture unprofitable. Furthermore, in this area of Molise, the scarcity of water in certain periods of the year causes low yields, leading farmers to give up agriculture.

The mosaic of cultivations of large estates, typical of the twentieth-century, still characterizes the locality of “La Pista” which extends for 594 ha in the municipality of Campomarino. The significance of the area is due to its landscape, characterized mainly by vegetable gardens, and by small plots used for crops, vineyards, and olive, peach and apricot orchards. Vegetables have been constantly farmed in the area ever since the original latifundium was divided up into small holdings, in the course of the nineteenth and twentieth century. The process began in the first decade of the nineteenth century, when feudal rights were abolished. Later, in 1863, small quotas were meted out to 190 indigent citizens. The origin of the present rural settling instead dates back to the 1940s, when the last phase of the elimination of the sharecropping system took place. During that period, the owners, in order to avoid paying their sharecroppers compensations in money, gave them part of the land they worked, or offered their own, or sold additional plots of land. As a consequence, a small rural settlement quickly grew alongside the road. Between the road and the houses, one still finds small family vegetable gardens, established at the time of the first settlement, which still maintain a degree of integrity. Houses are symmetrically located on the two sides of the road, almost on the edge of the roadway, occupying a central position in the holding extending behind them.

3. The olive orchards of Venafro 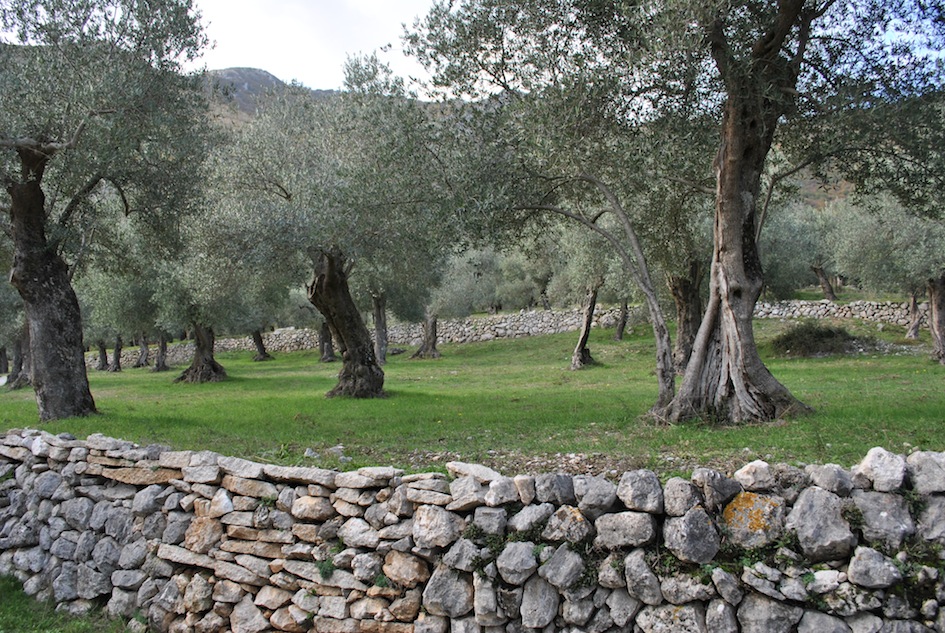 This area consists of 947 ha, mainly of olive orchards, in the municipalities of Venafro, Pozzilli and Conca Casale. The significance of the area is tied to the presence of the traditional olive farming landscape, with orchards of aged olive trees sometimes clustering into woods. The olive oil from this area was known and appreciated since antiquity as we know from the works of Columella, Horace, Varro, Pliny the Elder, Cato and Juvenal. Nowadays the local oil is labeled as “Molise” DOP, and the Ministry of Agricultural Food and Forestry Politics has included the “olive al naturale” of Venafro in the Traditional Food Product list. Molise Region and the Commune of Venafro have started the procedure for the institution of a Olive-Tree Regional Agricultural Park, which calls for the identification of all monumental olive-trees, some of which are many centuries old and have a spectacular circumference. This is a very important initiative, which finally acknowledges the importance of the cultural features of the Italian landscape, and seeks to counter the decline of agriculture.The landscape continues to largely maintain its integrity. The realization of terraces supported by dry-stone walls in the hilly areas has increased the historical interest of the landscape, besides helping ensure the hydro-geological stability of the land by reducing the risk of erosion. The vulnerability of the land is largely a consequence of the decline of agriculture. While in valley areas, new olive trees continued to be planted and existing ones are properly maintained, due to easier farming conditions, on the slopes, especially in the least-accessible areas, olive orchards have been practically abandoned. 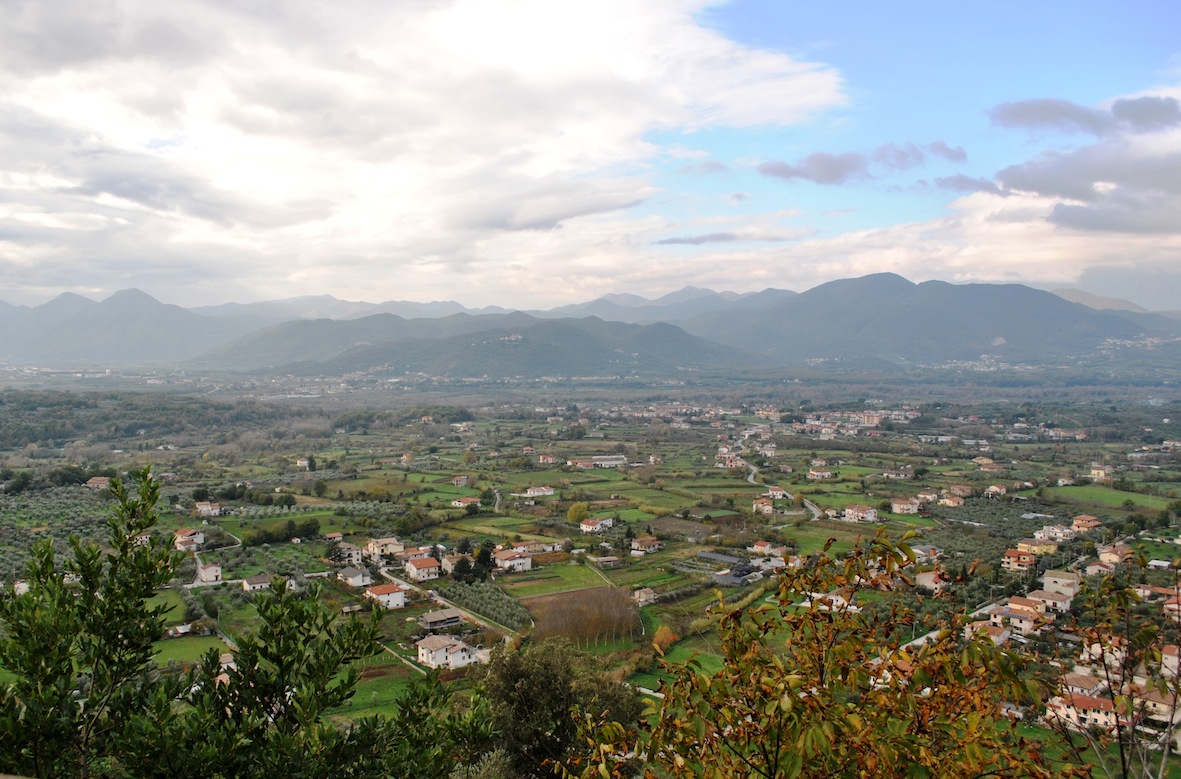 The area of the Springs of Monteroduni extends for 971 ha in the municipalities of Monteroduni and Montaquila. The old town of Monteroduni dominates the valley from a hill. At the top of the hill, rises the castle of Monteroduni, one of the most beautiful castles of Molise for its architecture, its excellent condition, and for its position. In 1193 the town was destroyed by the troops of emperor Henry IV and remained without water-works for about 800 years. However, many houses could rely on wells and reservoirs replenished by rainwater, which were used for household chores, while the various natural springs were used for drinking water. The various springs are connected in a unitary system. The area has a complex network of canals serving the various holdings, typical of the irrigation-based agriculture that has characterized this area of Molise in the last few centuries. The presence of springs has made possible the cultivation of wheat, forage, vegetables and fruit-trees over a long period of time, notwithstanding the fragmentation of the original estate. One of the main products of the area are peaches, of which there is a well-established local variety. Since 1911 irrigation is regulated by a “Code for the irrigation of the fields,” issued by the Commune of Monteroduni. As for the integrity of the area, the canal system serving the various vegetable gardens and cultivations are still well-visible. The vulnerability of the area consists in decreasing canal maintenance, which could lead to a decline in the supply of water for irrigation. Moreover, in past decades, there have been repeated efforts to channel waters using small cement canals or forced draught cast-iron tubes, but high costs prevented the projects from being carried out.

5. Sheep-tracks in the upper Molise 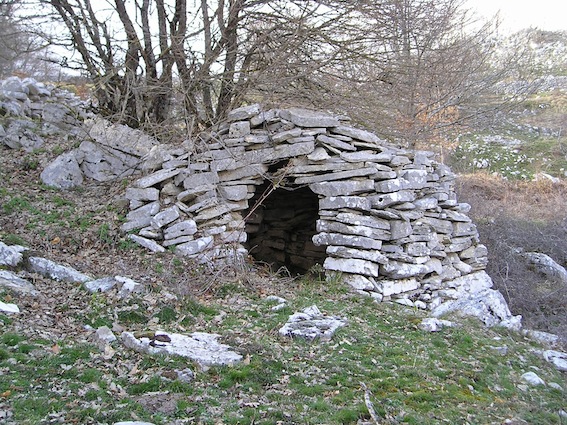 The mountainous area of the Molise region is characterized by ample pastures interspersed by woods and by fields where corn, pulse, potatoes and spelt are grown. This agricultural landscape is well-exemplified by the localities of Collemeluccio and Montedimezzo, in the province of Isernia, which are connected by the Celano-Foggia sheep-track. The area extends for 1472 ha and is located between two natural parks, which have been declared Biosphere Reservations and included in the MaB (Man and Biosphere) program of the UNESCO. The significance of the landscape is due to the presence of pastures and of the Celano-Foggia sheep-track, which is 110 m large and 127 km long and dates back to the time of the Sannites. In past centuries, it played a crucial role in shaping the economic and social system revolving around transhumance, which characterized the entire area. Many signs of past human presence can be found along the sheep-track (drinking troughs, shrines, huts and inns) and many villages developed along the sheep-track. If the extension of the sheep-track has remained the same, its usage has changed. It would be certainly anachronistic to think of reactivating transhumance, other than for occasional cultural events celebrating local traditions. On the other hand, well-preserved sheep-tracks could be used for cultural tourism, hiking and school-children’s excursions.The pastoral landscape retains a strong integrity, favored also by the mainly public ownership of the land. Open areas are regularly mowed while wooded areas and pastures are maintained through forest management plans. The vulnerability of the area lies in the decline of farming and the expansion of woods into pastures. There is an absence of effective policies that could make it economically convenient for younger generations to continue working as farmers, in areas such as organic farming, animal farming, or eco-sustainable tourism. The maintenance work on the traditional small stone refuges, the tholos, is also scarce.