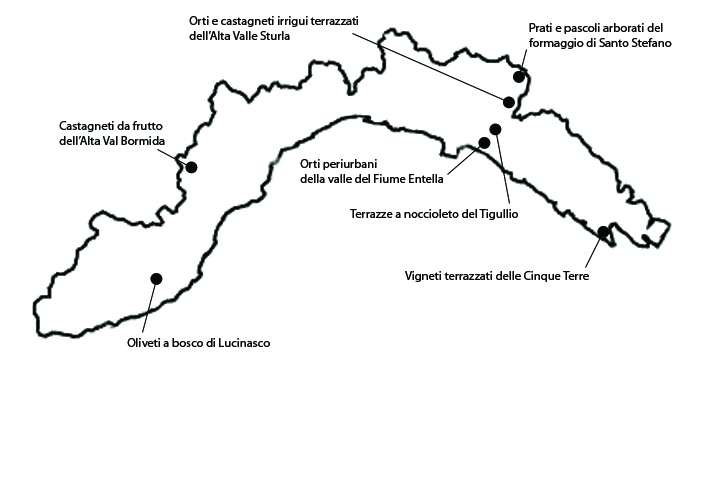 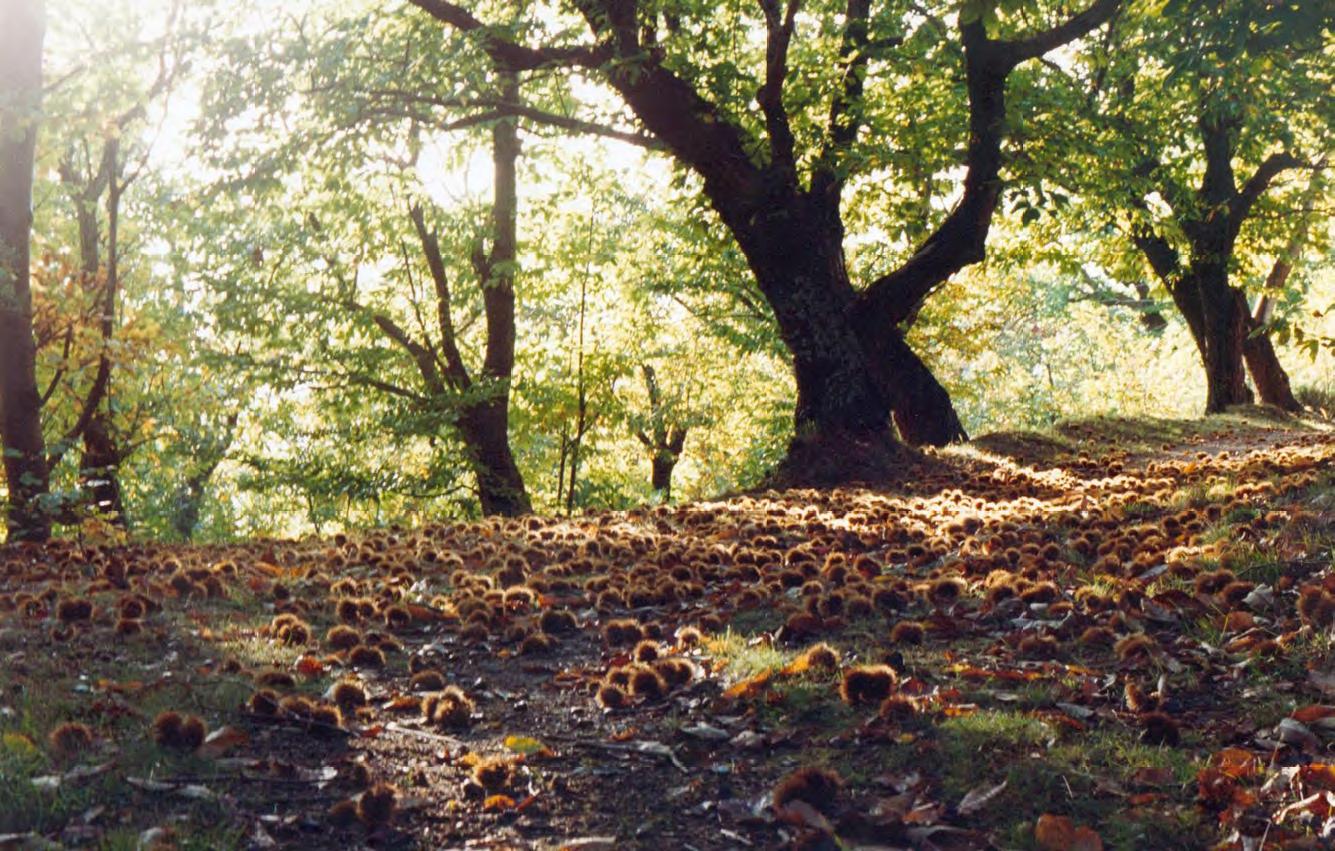 The chestnut orchards of the Alta Val Bormida are found in a forested area of 2283 hectares in the municipalities of Calizzano, Murialdo, Bormida, Osiglia. The significance of the area lies in the historical persistence of traditional chestnut orchards and in the importance chestnuts have had for local economy, beyond mere subsistence. This continuity is shown by the fact that farmers nowadays still cultivate the gabbina chestnut, a typical local variety. The landscape is characterized not only by the presence of chestnut, some of them of monumental characteristics, but also by that of small isolated rural buildings, situated on small clearings, where a single family usually lived growing vegetables, and fruit or olive trees, for its own use. There also are stone or solid brick constructions used for exsiccating chestnut (known as tecci). Towards the end of the nineteenth century, the high forest orchards used for producing chestnuts were largely replaced by coppice orchards, used for the production of poles for vineyards or firewood. The landscape associated with the gabbina chestnut appears to have largely retained its integrity. In general, the abandoning of chestnut growing has caused the gradual transformation of the chestnut orchards into woods in which also other species are presents, aside for the transformation of chestnut orchards into coppice woods. As for vulnerabilities, besides the above-mentioned abandoning of some of the orchards, the pasturing of sheep to rid the orchards of the undergrowth is no longer practiced. This not only diminishes the beauty of the orchards and makes chestnut gathering more difficult, but also increases the risks of parasites and diseases, besides favoring the development of other species. There have also been significant episodes of infestations by Dryocosmus kuriphilus. 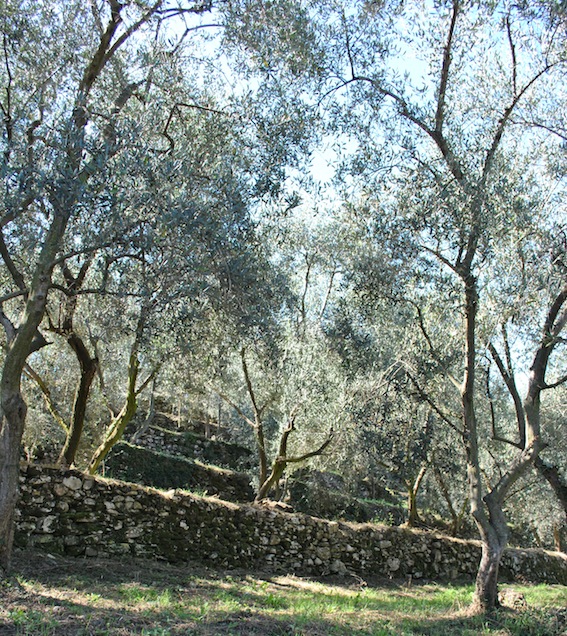 The area is located in the municipality of Lucinasco and it extends for 499 hectares. The wooded olive orchard landscape is particularly significant not only for its historical persistence, but also for the particular arrangement of the orchards, with very high olive trees, as they are not pruned, and for the work done on the slopes to cultivate them despite their steepness. The olives produced are of the taggiasca variety. Historically, the relation between olive farming and shepherding has helped shaping the agricultural landscape with the combination of the caselle, constructions shaped as truncated cones in dry stone, used by shepherds and farmers, and terraced olive orchards. Olives are nowadays used for the production of the PDO olive oil Riviera Ligure and also for direct consumption. The integrity of the rural landscape is guaranteed by the maintaining of the terraces, on which the local variety is still cultivated. There are many family farms that maintain a close relation to the land, and the institution of the PDO label for the olive oil of Lucinasco has helped their activity. Though in Lucinasco the decrease of olive orchard surface has been acceptable, what has gone completely lost is the practice of pasturing in the orchards, other than for a few occasional sheep, a feature which historically characterized the local landscape. 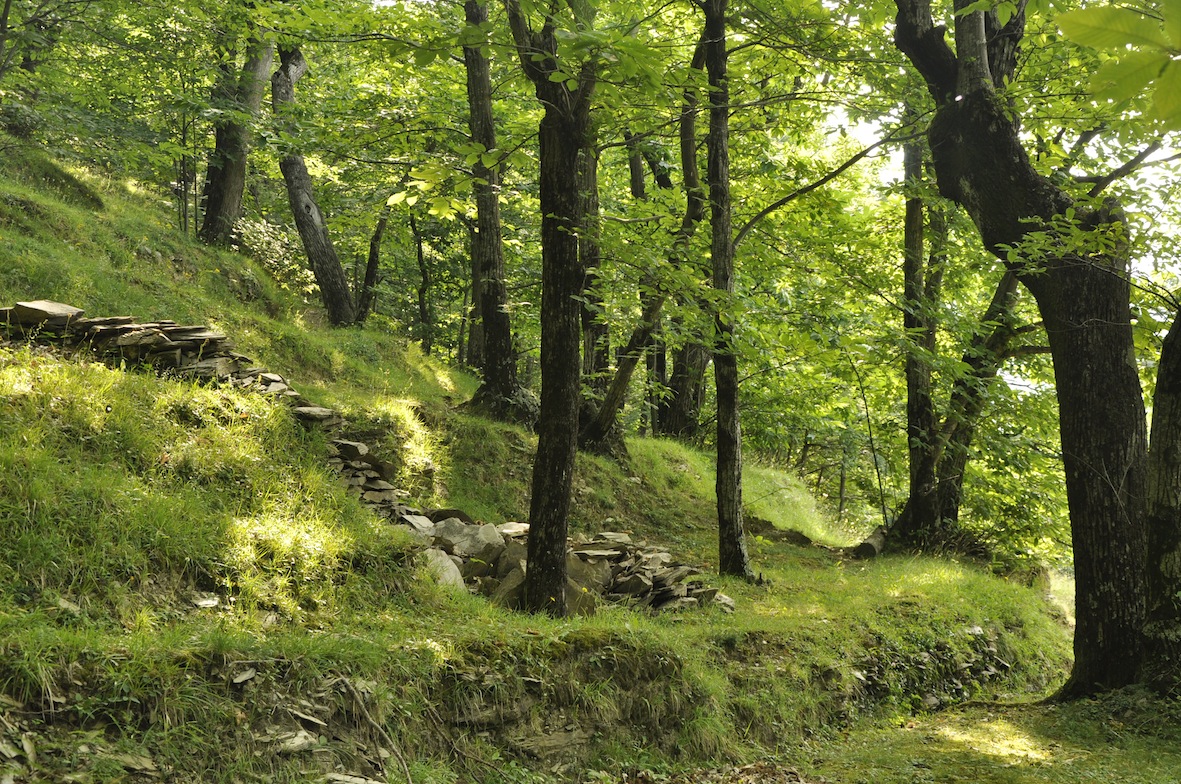 The selected area actually consists of a system of multiple areas located in the municipality of Borzonasca, in a territory extending for about 756 hectares. The significance of the terraced chestnut groves of the Alta Valle Sturla is tied to the presence of a network of aqueducts used to irrigate the terraces, which create an absolutely unique scenery. The cultivation of chestnuts and of vegetables, typical of many Apennine areas, is here associated with the reshaping of the slopes and the adoption of a complex irrigation system. At higher altitudes, instead, the area is characterized by wide pastures. The system is documented since the seventeenth century. The landscape of the chestnut groves and irrigated terraced vegetable gardens largely retains its integrity and only some areas have been abandoned. Another element of integrity lies in the management of the chestnut groves and of the pastures, thanks to two associations for the improvement of animal farming. The greatest vulnerabilities consist in depopulation and in the aging of the population, which leads to a gradual abandoning of cultivations, lack of maintenance of the terraces and a decrease in the number of farm animals. The abandoning of the chestnut groves leads to their transformation into mixed woods, losing their historical characteristics.

4. Peri-urban vegetable gardens in the valley of the Entella river 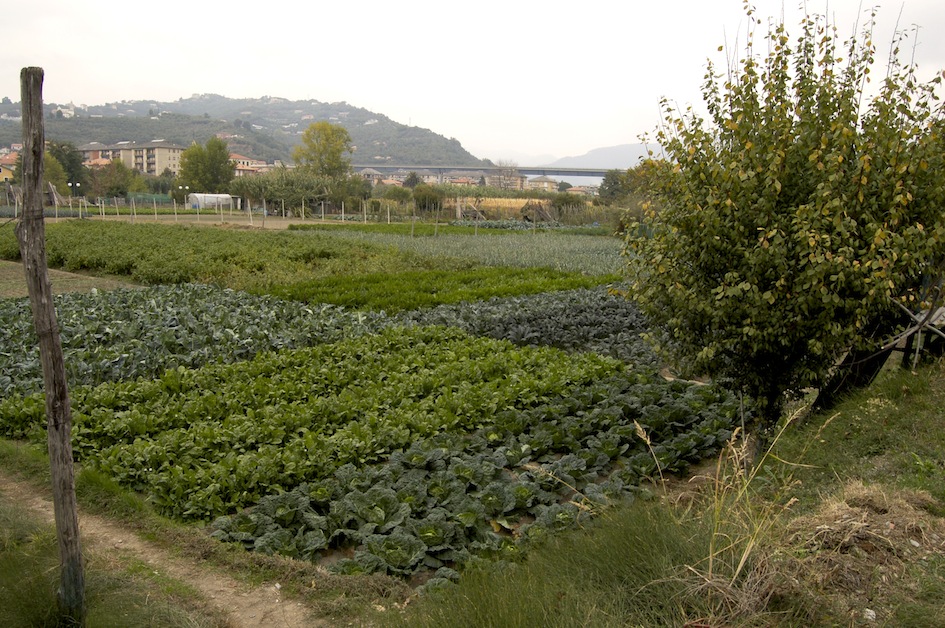 The vegetable garden area is located in the municipalities of Chiavari, Lavagna, Cogorno, Carasco and Ne, and it extends for 313 hectares. Horticulture retained its integrity until the early twentieth century, notwithstanding the major changes that occurred in the plain from the seventeenth century to the end of the nineteenth century, when the stone bank was built and the last stretches of marshland reclaimed. The plain of the Entella is still characterized by a mixed agriculture in which, alongside viticulture, there are vegetable gardens with varieties that are unique to the area and labeled PDO, such as Genoan basil, or recognized as Traditional Food Products by the Ministry of Agricultural Food and Forestry Policies, such as the Lavagnino Broccoli, the Radice di Chiavari, or the Lavagna Pea. The area retains its integrity especially in the area of Lavagna, in which the vegetable gardens, almost all of them cultivated in combination with rows of vine, have been saved from urbanization, so that in a few areas horticulture is still practiced by family businesses. The majority of the production of the vegetable gardens is still sold directly in the holdings. The landscape associated with the vegetable gardens is highly vulnerable, suffering from the expansion of urban areas and infrastructures. The old age of the majority of farmers that continue to practice horticulture independently of its actual profitability could also be a problem for the maintenance of the landscape and the preservations of local varieties.

5. Wooded meadows and pastures in the Santo Stefano cheese area 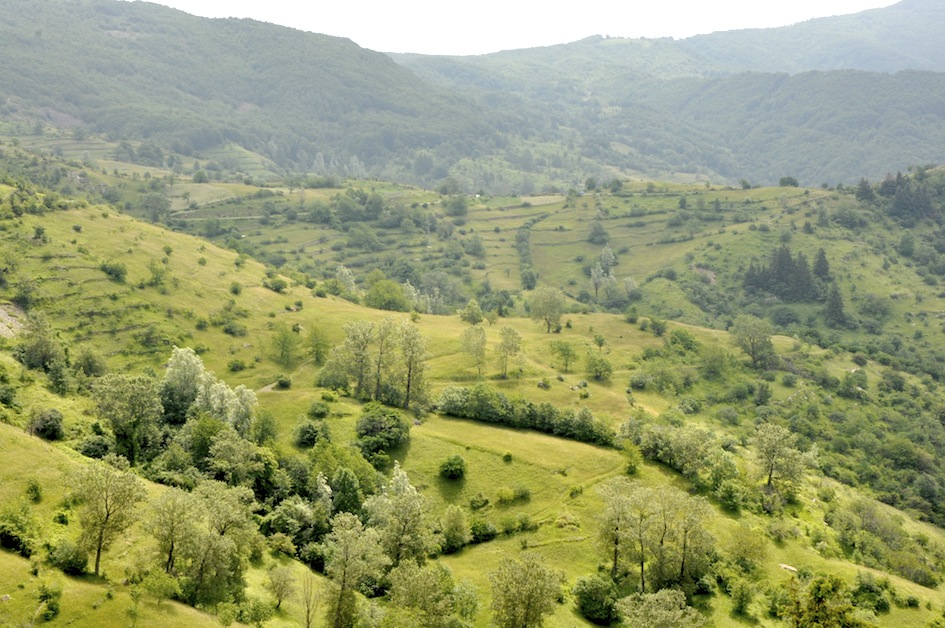 The selected area consists of pastures extending for about 1184 ha, in the Liguria-Emilia Romagna stretch of the Apennine in the municipality of Santo Stefano d’Aveto. The significance of the area lies in the presence of a landscape deriving from the historical agro-silvo-pastoral systems located near the forest of Mount Penna. Besides its historical persistence, the landscape is characterized by a great variety of environments, with sheer basaltic cliffs, wet areas and ample pastures both bare and wooded, which constitute the greatest reserves of biodiversity of the Apennines. There are many ex-feudal woods still subject to common rights and common lands, where you can find pastures sill used for the production of local cheese known in the nineteenth century as Santo Stefano cheese, and nowadays listed as Traditional Food Product by the Ministry of Agricultural Food and Forestry Polices. The landscape still presents a notable integrity though many parts have been subject to forestation processes due to the abandoning of agriculture. The vulnerability of landscape of the meadows-pastures and wooded pastures in due to the abandoning of the annual cycle of agro-silvo-pastoral practices, that is the succession of mowing, pasturing, winter cleaning and used of controlled fires which, in these areas was still adopted in the 1970s and 1980s. 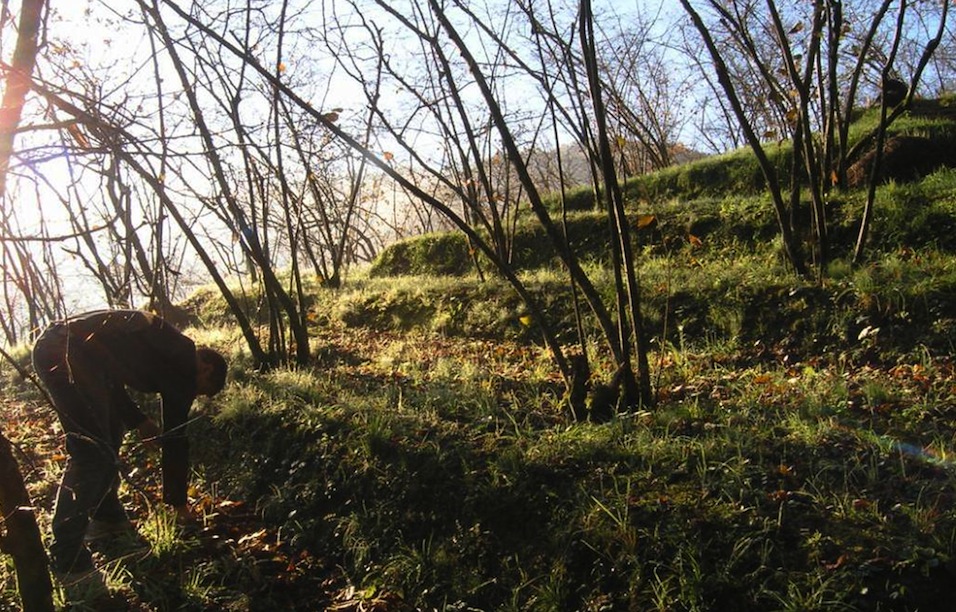 The terraced hazelnut groves are located in a wider area extending for 844 ha o in the municipalities of Mezzanego and San Colombano Certenoli. The terraced hazelnut groves are a highly significant cultivation, a sign of the persistence of a very ancient practice. The terraces are of various age and structure, sometimes constructed on very steep slopes, and have shaped the landscape of many of the slopes of Tigullio. It is to the fifteenth century that the first notary acts mentioning hazelnut groves are dated. Hazelnut continued to be cultivated till the 1970s when, in a moment of maximum production, a series of factors caused a major crisis and the partial abandoning of groves. The recent listing of the varieties of Tigullio hazelnut as Traditional Food Product by the Ministry of Agricultural Food and Forestry Policies, has determined a slight increase in production. Though the groves are fragmented into small non-contiguous areas and their extension has decreased, the hazelnut landscape has largely retained its integrity. This integrity is the result of the fact that the production of hazelnuts has always continued. The main risks are associated with the abandonment due to the advanced age of farmers and to the high cost of manual production, the lack of a consolidated local market and the conversion of some hazelnut groves into the more remunerative olive groves.

7. Terraced vineyards of the Cinque Terre 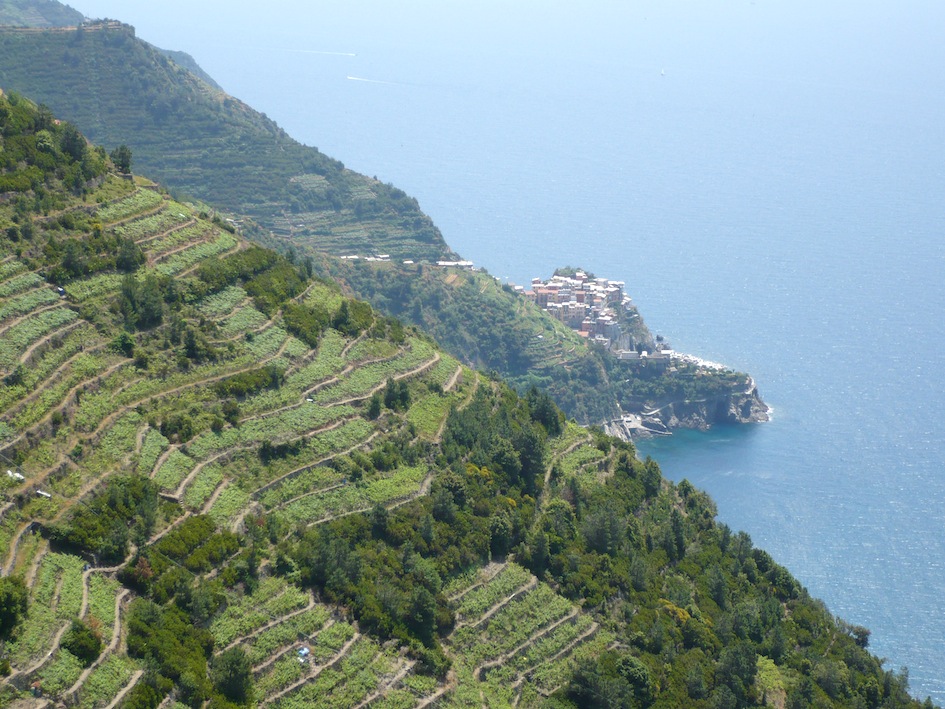 The area is characterized by low-growing vineyards on terraces, extending in an area of 989 ha within the territories of Vernazza, Riomaggiore, La Spezia e Portovenere. The area is included in the Cinque Terre National Natural Park. The area owes its significance to the combination of the aesthetic qualities of a landscape with precipitous slopes descending to the sea and the historical persistence of low-growing vineyards. Here viticulture, attested as early as the twelfth century in documents in the Tino monastery, has the same features as in Cinque Terre, but even more accentuated: fragmented and parceled private property; farming on artificial terraces retained by dry-stone walls and connected by steps and narrow paths; a clear-cut prevalence of grapevine, low-growing (the earliest system), on pergolas, or in rows (the more modern system, which is gradually replacing the other two); and olive-growing for self-consumption. The production is oriented towards high quality wines, as “Cinque Terre” DOC (Controlled Origin Denomination), and “Sciachetrà” DOC (also called rinforzato), which is also added by Slow Food in the “Ark of Taste” list. Although part of the land has been abandoned the traditional system continues to function today, although on a smaller scale. Especially near the sea, the traditional model still maintains its integrity: piane (terraces) with low-growing grapevine, low walls restored in the old style, and casotti still used to service viticulture. The oldest vulnerability of the area is its landslide proneness. Landslides have been increasing after the last war as a consequence of the decline of farming and the collapsing of retaining walls. Another threat is the expansion of woods onto abandoned terraces.