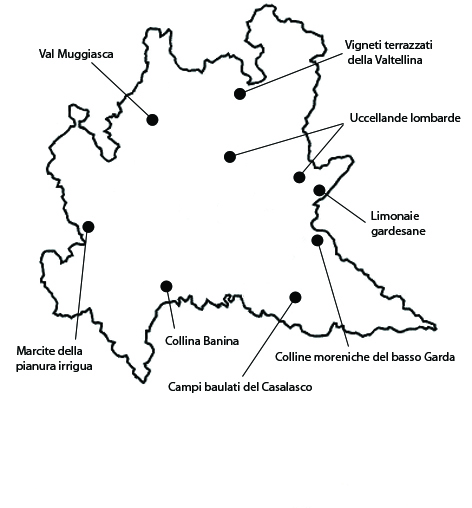 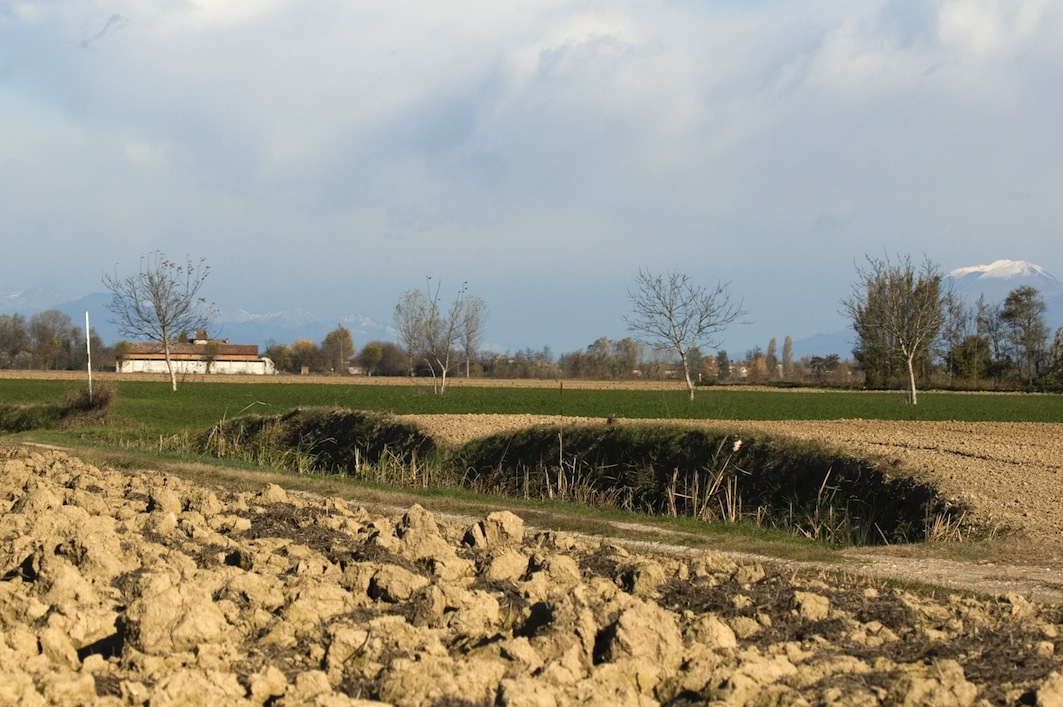 This rural landscape is characterized by the presence of the traditional campi baulati system. It extends for about 2000 ha in the municipalities of Piadena, Calvatone, Tornata and San Giovanni in Croce. The significance of the area is due to the historical persistence of the field management and irrigation system typical of the Casalasco area known as baulatura. The balauti fields are not continuous, but occupy small portions of the above area specifically tied to the use of this agricultural technique. The balautura system has the purpose of rapidly draining rainwater from mostly argillaceous fields. Fields are shaped with a central hump and kept in this condition through a special plowing system. The draining of excess water is guaranteed by ditches that are still in good repair. Fields are traditionally quite large, mostly rectangular with an average size of 100-150 by 40-70 m. A thick network of parallel ditches, ensures the draining of excess water. In this way, instead, water stagnates only in particularly rainy years. Concerning  integrity,  few  holdings, in which a few rows of trees or small family vineyards are all that is left to separate the areas now dedicated to the cultivation of cereals, tomatoes, or melons. In the second half of the twentieth century, the system based on the combination of vine and other crops progressively disappeared, and in recent years there have been yet more changes due to the expansion, still under way, of vegetable gardens and nurseries of ornamental plants. 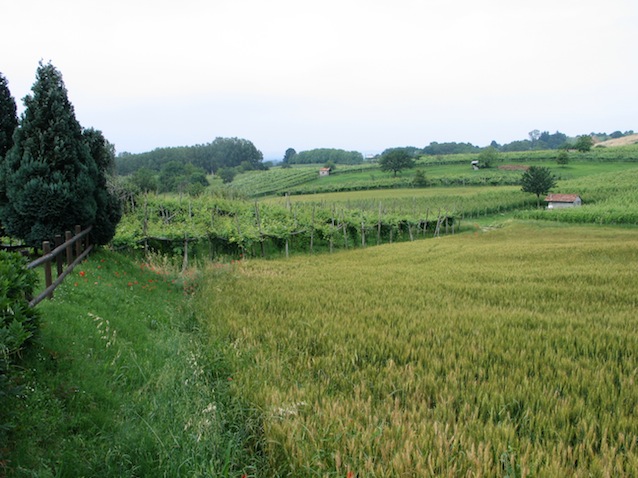 The area corresponds to the agricultural system of the Banina hill and extends for about 1151 ha in the municipalities of San Colombano al Lambro, Graffignana and Miradolo Terme. The significance of the area lies especially in the persistence of the original agricultural landscape characterized by a highly subdivided network of holdings, in which vineyards, meadows, and fruit orchards alternate. The area is already mentioned in Middle-Age sources. The land was subdivided among small and medium-sized owners of pieces of land spread out over the hill rather than concentrated in single properties. The integrity of the area is tied to the historical persistence of a highly subdivided network of holdings, although the characteristics of the cultivation have changed in time. Vine is the main cultivation, from which the DOC (Controlled Origin Denomination) label wine “San Colombano al Lambro” is produced, but vineyards continue to alternate with meadows and fruit orchards. Vulnerabilities are in part tied to the transformation of cultivations and in part to the fragmentation of the property. 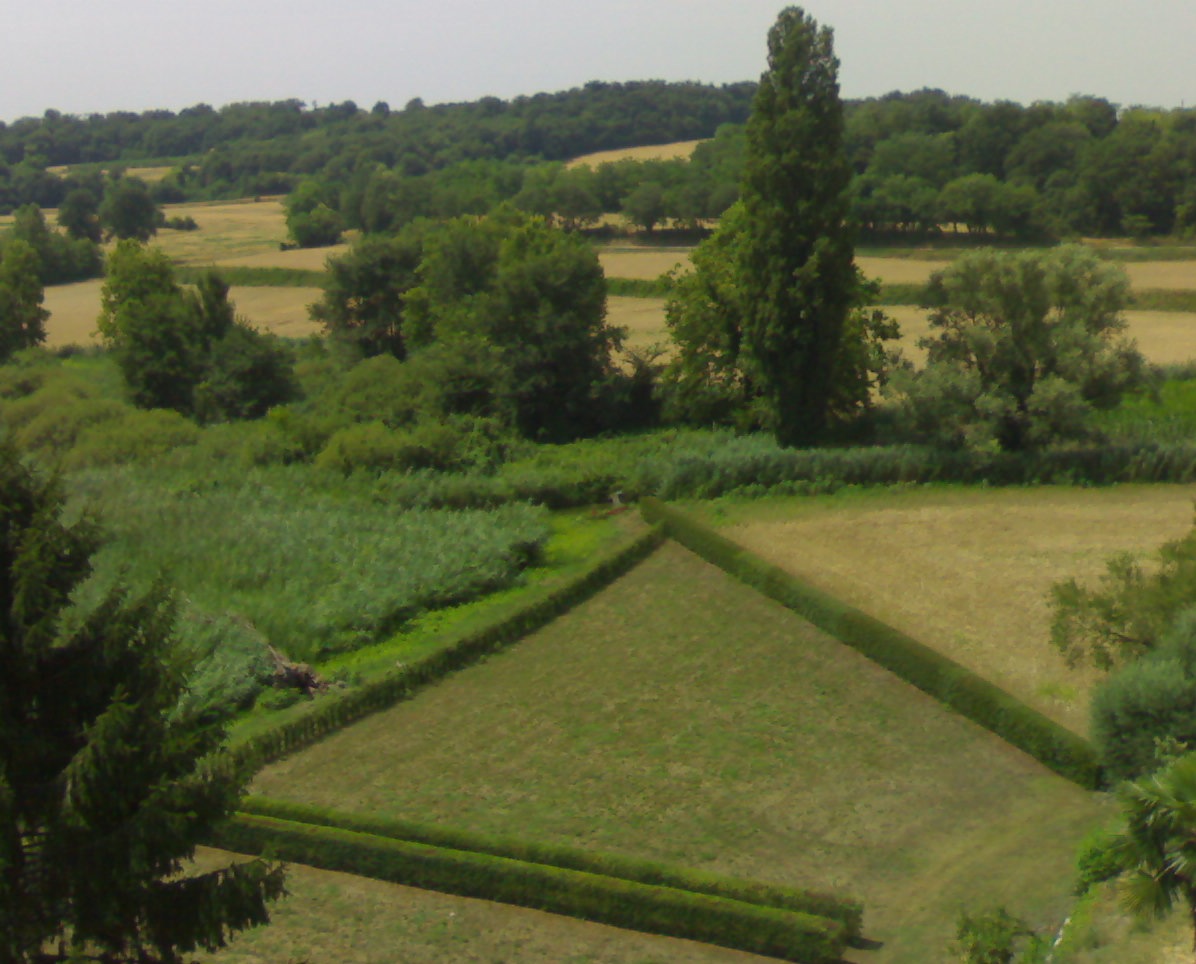 The area in question corresponds to the hills of the lower Garda river, extended for 1360 hectares, in the territories of the municipalities of Ponti sul Mincio, Monzambano and Cavriana. The significance of the local landscape lies in the combination of the special environmental characteristics tied to the mild climate typical the ancient Insubria region, combined with the historical persistence of agricultural activities and the beauty of the Garda scenery. Populated since the pre roman times, the area is characterized by the presence of vineyards and olive orchards, besides the woods. Hills alternate with barren fields and spring water ponds. Along with the natural vegetation, which includes willows, alders, downy oaks and European hop hornbeams, a typical feature of the cultural landscape is the presence of cypresses, introduced a long time ago, and commonly used to mark the ridge of hills. On the southern slopes, we usually find terraced vineyards, which produce the DOC (Controlled Origin Denomination) label wine “Colli Morenici del Garda”. The integrity of the landscape depends on the preservation of agriculture. As one can expect, given the extension of the area, there are parts in which both the expansion of urban areas and changes in agriculture have reduced the overall integrity of the landscape. The vulnerability of the area is tied to the tendency towards urbanization, which tends to create a marked continuity of buildings, and to further changes in and intensification of agriculture. Furthermore, the transformation of many farmhouses into secondary residences is altering one of the most significant aspects of agricultural landscape.

4. Lemon houses on the Garda Lake 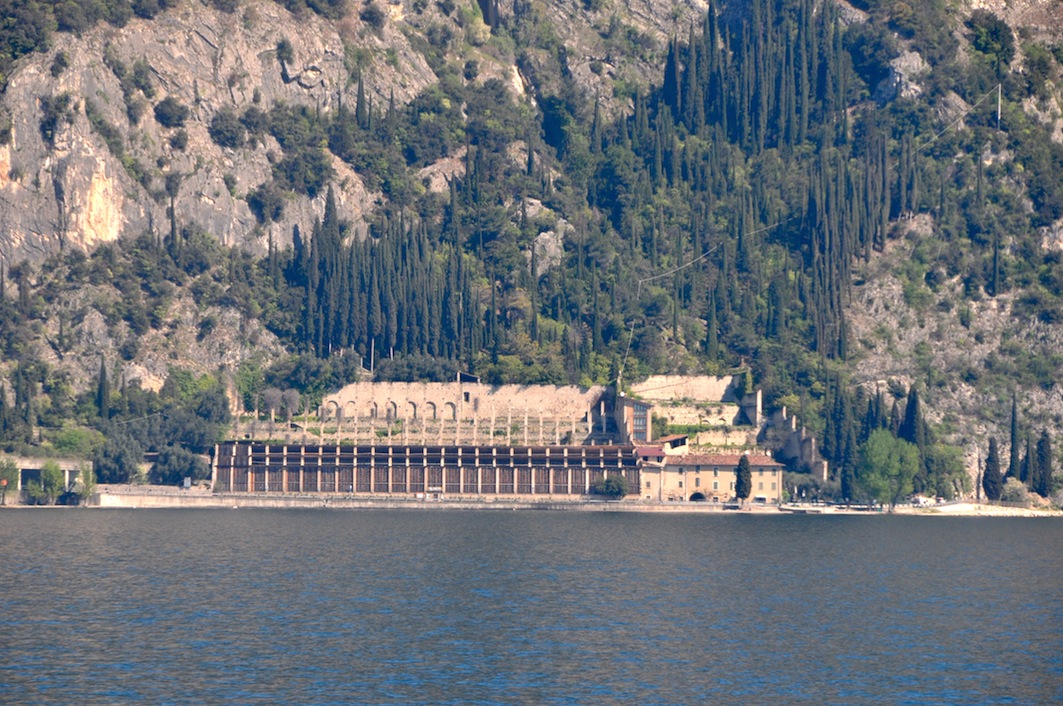 This lemon orchard area extends over a 300-meter-deep strip along the banks of Lake Garda, between Salò and Limone, mainly in the municipalities of Gargnano, Tignale, and Limone sul Garda. The area owes its significance to the historical persistence of the most characteristic cultivation of Lake Garda – introduced as early as the thirteenth century, possibly by the friars of the convent of San Francesco di Gargnano – and the aesthetic qualities of the Garda landscape. To make citrus growing possible at this latitude (the northernmost in the world for citrus), as early as the sixteenth century imposing structures called limonaie were built, consisting of large rectangular hothouses on long terraces. Limonaie have high perimeter stone walls on three sides, and pillars up to 10 m tall connected by a framework of chestnut-wood beams. Each pillar is joined to the two adjacent pillars on the same row by three parallel maple beams, to which movable shutters were attached to close off the open side of the limonaia. From November to March, to protect the orchard from the cold the limonaie were closed with large wooden movable partitions with glass windows, and covered with wooden-plank roofs. As regards integrity, most of the citrus-growing areas have been converted to other agricultural uses or to private gardens, and in some cases are greatly deteriorated or changed. Only ten or so limonaie are still active and productive.

5. The marcite of the irrigated plain 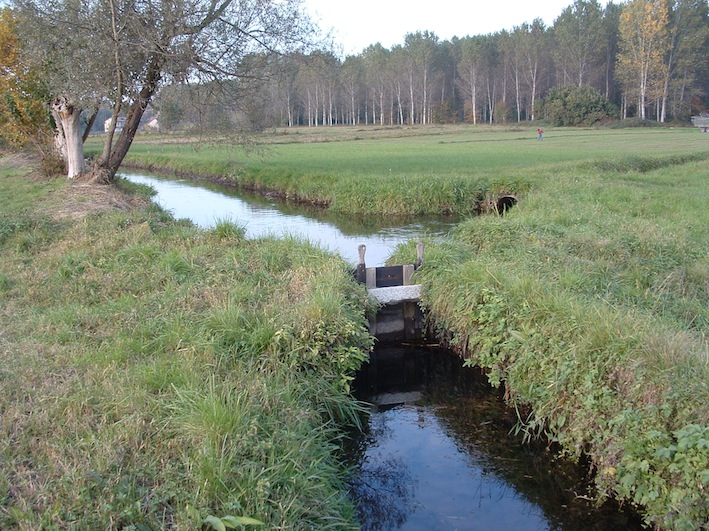 The marcite landscape has a total extension of about 428 ha, comprising scattered areas in the irrigated plain between the Ticino and Adda rivers. Here we consider the ones located in the municipalities of Morimondo, Vigevano and Gambolò, called Marcite della Sforzesca and Marcite di Morimondo. The marcite are a very old type of permanently irrigated meadows owing their significance to their characteristic hydraulic-agrarian structure and their ecological role. They are large, slightly inclined rectangular plots. In their higher parts, water runs in small channels called maestri or adacquatori, from which it overflows, inundating the meadow and forming a thin tepid sheet over the grass cover. In the lower part of the meadow, drainage channels collect the excess. This cultivation method was introduced in the early Middle Ages, when Cistercian monks built a dense network of large and small artificial canals to reclaim the plain. The constant flow of water from underground springs called risorgive, and its almost constant temperature prevent frost, even in the coldest months. Thus, grass grows lushly, allowing mowing up to 10-12 times a year, even under adverse climatic conditions. They also have an important ecological role as a refuge for many aquatic and marsh plant and animal species. The integrity of the marcite areas is still good, but the vulnerability of these plots is high, because they need constant maintenance and specific subsidies are scarce. Hence, marcite are often “broken” and converted into grain fields.

This landscape was selected for the presence of uccellande, vegetable structures used for hunting locally known as roccoli or bresciane. These structures, made by modeling trees into traps for various avian species, were once widespread in Italy. They owe their significance to their historical persistence and uniqueness. A 1931 census reports 880 uccellande in Lombardy. Uccellande have a round or horseshoe-shaped plan, about 50-60 m in diameter. They are bordered with trees (usually hornbeam) arranged and pruned so as to form windowed vegetable tunnels concealing vertical bird-catching nets. They also have a wooden pergola, known as tondo, completely covered with regularly pruned vegetation. Thus, roccoli are elaborate “vegetable buildings” requiring continuous and programmed maintenance. As regards integrity, many roccoli are still quite well preserved. Some are kept in activity employing traditional techniques, capturing birds for ringing for scientific purposes or to supply decoys for species whose hunting is allowed in Lombardy. Other roccoli still retaining their arboreal structure are used as bird-watching stations or as a feature in public or private parks. The vulnerability of these peculiar arboreal structures principally depends on the ceasing of their use for hunting. They are features of the local landscape and environmental heritage, testimonies of an ancient folk culture that are worth conserving and maintaining as a complex system that is highly characteristic of the rural landscape of Lombardy. 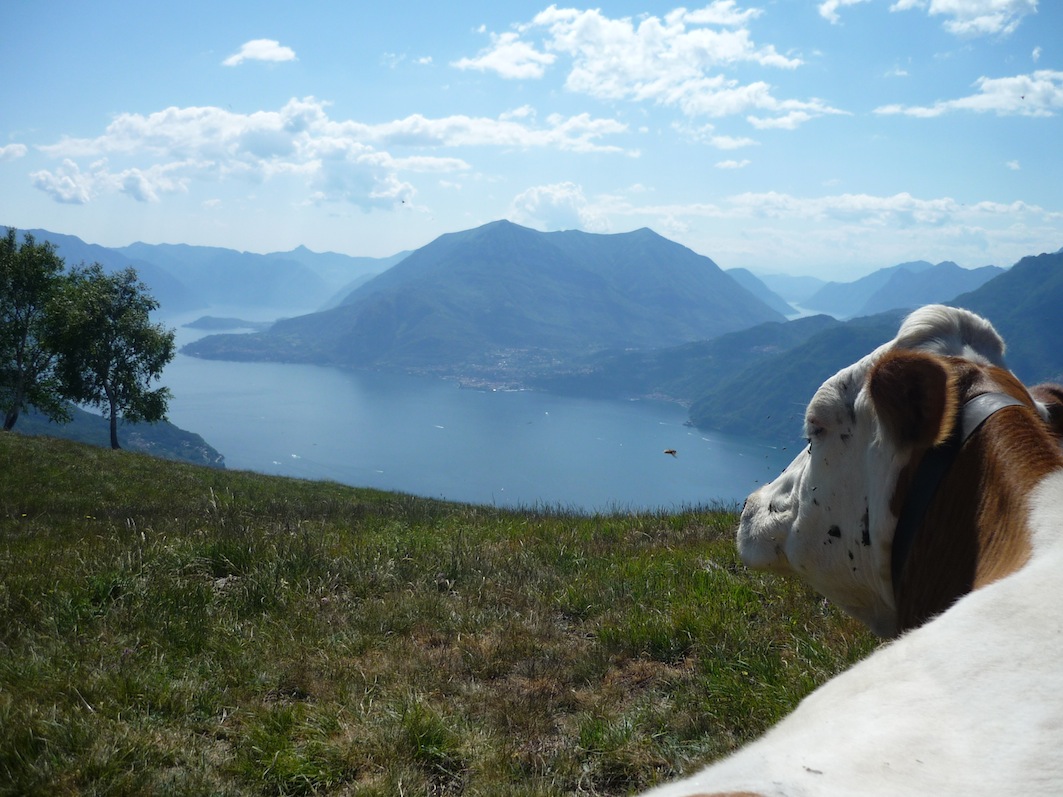 The mountain landscape system of Muggiasca extends over 945 ha, within the municipalities of Vendrogno, Casargo, Margno, Crandola Valsassina, Taceno, Parlasco, Bellano. The landscape system of the Val Muggiasca owes its significance to the historical persistence of the typical physical features – woods alternating with pastures, meadows, small terraces and contour terraces – associated with “vertical” farming and livestock-raising; that is, the seasonal migration of farmers, herdsmen and livestock from the lower versants in the winter to the upper ones in the summer. This practice, known as alpeggio, dates all the way back to the Middle Ages. Similar landscapes systems are found in many other valleys in the Alps, but the Val Muggiasca owes its integrity to the preservation through the centuries of its historical use, down to the present day. As regards vulnerability, it is increasing as a result of the partial abandonment of the valley versants, the decline of agriculture and livestock raising, and the consequent abandonment of pastures, especially the least accessible ones. The woods are gradually extending over terraced fields and meadows. More tracks and trails may to be asphalted in the future, allowing motor vehicle traffic in excess of the area’s capacity. New uses of rural buildings have led to often incongruous renovations that do not blend well into the local landscape.

8. Terraced vineyards of the Valtellina 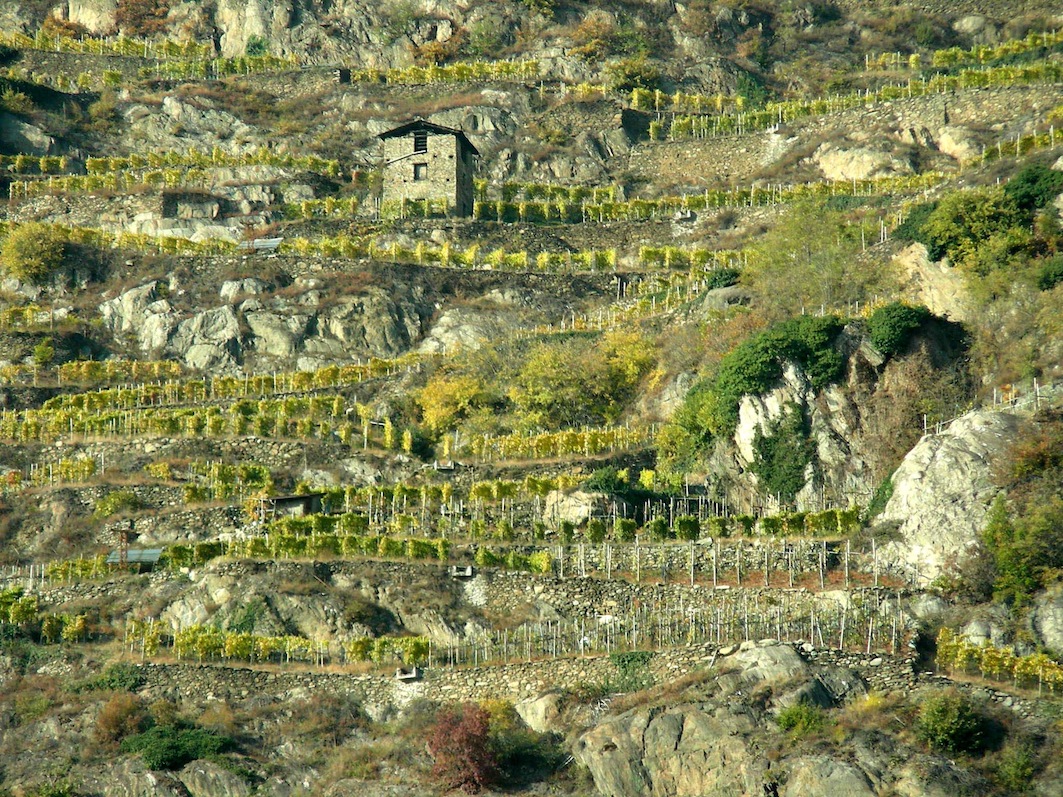 The terraced vineyards of the Valtellina extend over 690 ha, in the municipalities of Sondrio, Montagna in Valtellina, Poggiridenti and Tresivio. The area owes its significance to the historical persistence of viticulture on dry-stone terraces along especially steep slopes, with gradients sometimes higher than 70%. The result is a spectacular landscape. Grapevine is grown all over the Valtellina. Historical documents indicate that these terraces were mainly built between the tenth and fourteenth centuries, allowing the farming of very acclivitous slopes by strenuous shaping of the mountainsides. It is mainly monks who started the interminable work of clearing woodland and building terraces to allow the growing of grapevine along the Rhetian versant. The Valtellina has a much more favorable climate than other mountain areas at the same latitude, allowing the production of an excellent Nebbiolo wine, also favored by other concomitant factors. Due to the valley’s west-east alignment, its whole northern versant faces south. The dry-stone walls also contribute to the maturation of the grapes by absorbing heat during the warmer hours and releasing it during the cooler ones. The area produces quality wine: DOC (Controlled Origin Denomination) Valtellina Rosso, and DOCG (Controlled and Guaranteed Origin Denomination) Valtellina Superiore and Valtellina Sforzato. The selected area’s integrity lies in the fact that the present viticultural landscape still maintains not only its terraces, but also most of the extension it had in the nineteenth century. Some parts, however, have been abandoned and reclaimed by the forest. As regards vulnerability, objective difficulties in the cultivation of terraced areas and high production costs are gradually leading to the abandonment of farmland, not just at high altitudes, but also, in recent years, at lower altitudes where landscape and environmental value is higher.