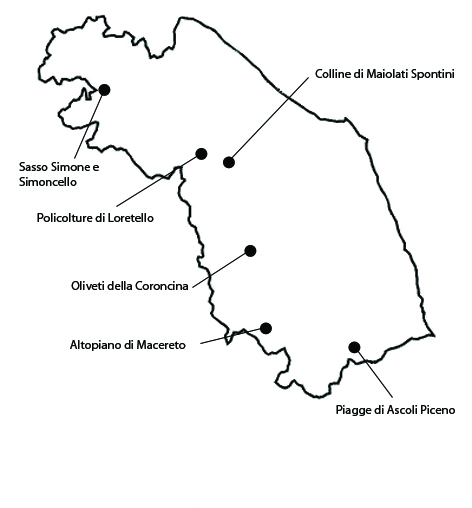 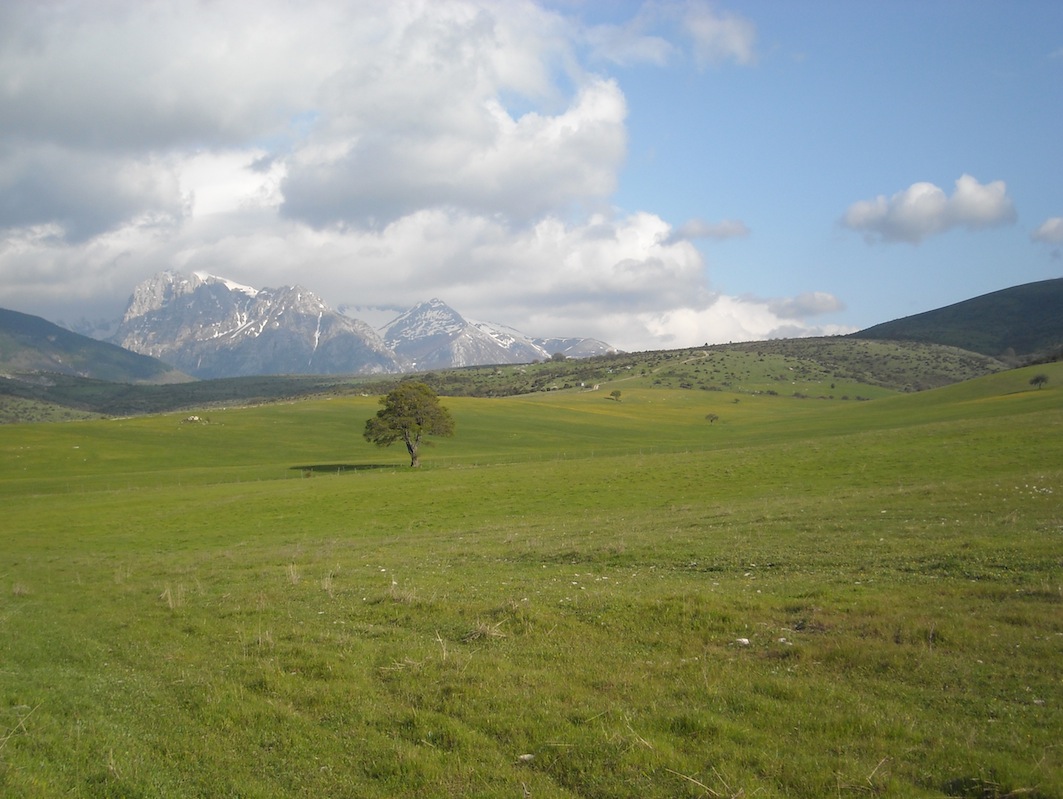 LThe plateau of Macereto extends for about 3114 ha in the municipalities of Ussita, Visso, Acquacanina, Fiastra, Fiordimonte e Pieve Torina. It is part of the Monti Sibillini National Park. The area is highly significant, due not only to the historical persistence of vast pastures with isolated trees, but also of a 1529 sanctuary by Bramante, the greatest expression of the Renaissance in the Marche region. The existence of common land rights in the area has influenced the landscape, in which enclosures are almost entirely absent. The pastures were once known for the presence of the sopravissana sheep, a cross between the Spanish Merino, the French Rambouillet and local varieties, which provided an excellent wool. In the summer, herds of vitellone bianco of the Central Apennine (PGO label) are also brought here to graze. The landscape of the Macereto plateau has a high degree of integrity. Secondary pastures retain their integrity thanks to the herds that pasture here in the period between June and October. Besides the sedentary herds, which amount to about 3000 animals, many others are taken here during the summer: the transhumance, that is the annual migration of herds to warmer areas, is still practiced, though nowadays it is done with trailer trucks. The vulnerability of the area is tied to the abandoning of shepherding and the consequent disappearance of pastures. The reduction in the number of animals favors the growth of new spontaneous weeds and worse the development of secondary phases with the growth of shrubs, especially juniper. 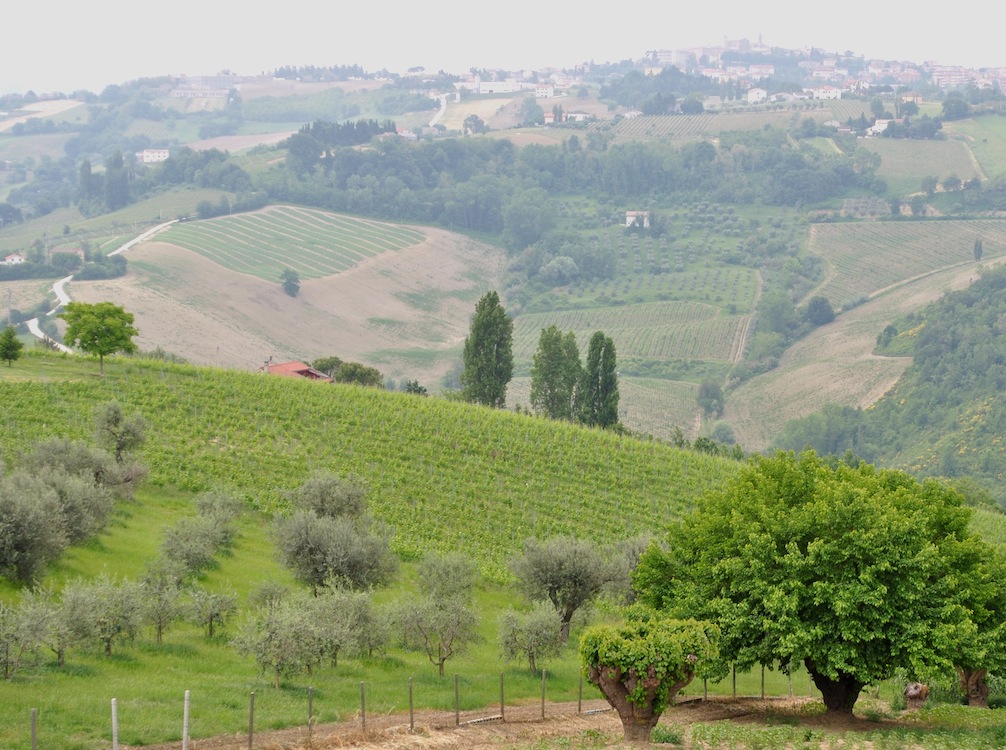 The hills of Maiolati Spontini extend for about 1049 ha in the northern part of the municipality of Maiolati Spontini. The significance of the landscape is tied to the historical persistence of an agricultural mosaic characterized by the presence of fields with olive-trees, vines and wheat, a typical sharecropping pattern, and small woods, which are integrated in the rural economy and used mostly for timber and firewood. The local wine has been assigned the ‘Esino’ DOC (Controlled Origin Denomination) label. The landscape maintains a good degree of integrity. The farmhouses along with the various traditional cultivations have survived, although the vineyards with maple-trees have mostly disappeared. In the area, there are many centennial oaks and olive-trees. Some of the ancient farmhouses have been restored and are now used as tourist farmhouses. In the area near the river, in the thirteenth century there were many water mills, connected to a thick network of canals.The greatest present vulnerabilities for the rural landscape of the Hills of Maiolati Spontini are the risk of further abandoning of lands, of the intensification of agriculture in other areas, and of erosive phenomena. So long as the co-presence of small wooded areas and traditional cultivations will continue, these phenomena will be kept under control, but if this balance is altered due the intensification of cereal cultivation, of sunflowers, or of olives and wine-grapes, as in other areas of the province, they will become a serious problem. 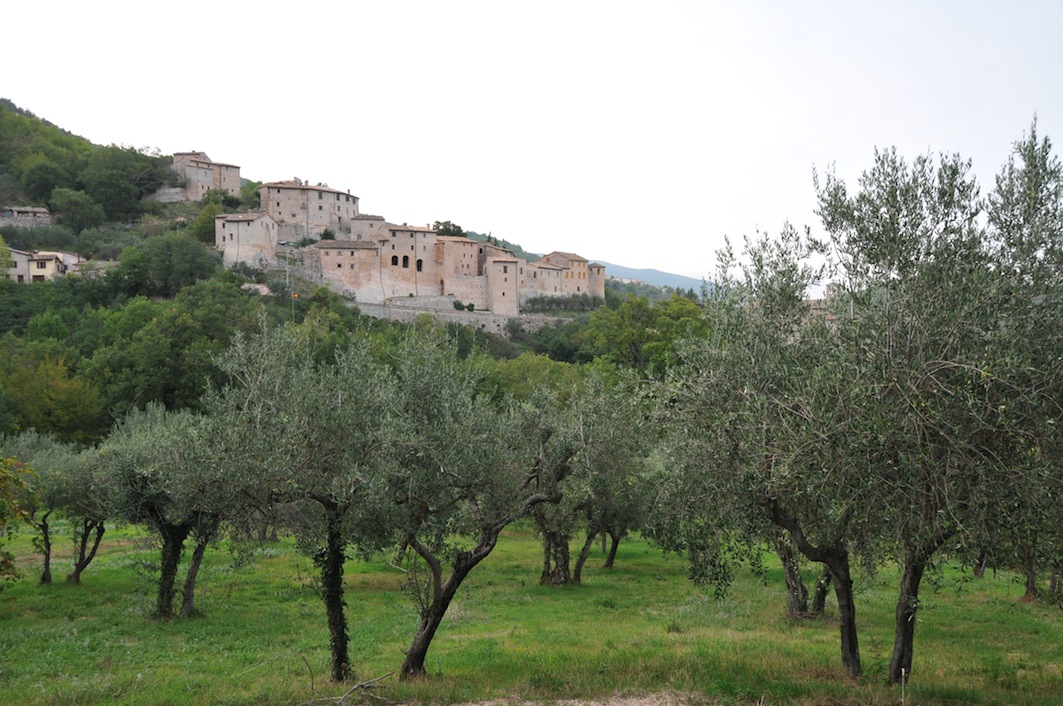 The olive orchards of Coroncina, extends for 840 ha in the municipalities of Caldarola, Belforte del Chienti and Serrapetrona. The significance of the olive orchards of Caldarola lies in the historical persistence of a varied scenery, in which the dominant olive cultivations of ancient origin combine with coppice woods of downy oak, untilled areas undergoing spontaneous forestation, and pastures with traces of ancient olive orchards, as well as numerous hedges and rows of trees used to mark the borders of fields. In particular, the olive oil ‘mono-variety Coroncina’ is listed as Traditional Food Product by the Ministry of Agricultural Food and Forestry Polices. The landscape of the olive orchards of the Coroncina, in its various aspects, appears to generally maintain a reasonable degree of integrity. Cultivation techniques are still traditional, manure is used as fertilizer and no irrigation is usually done. Family members, transmitting the culture of olive farming from one generation to the other, usually do pruning every one or two years. An element of vulnerability is the danger of an intensification of agriculture which would lead to a gradual specialization of cultivations.

Adjacent the old city walls of Ascoli Piceno, there is a cultivated area of about 326 ha, known as the Piagge. The landscape of the Piagge is significant insofar as it represents a rural area rich in historical elements, in terms of the work done on the slopes, the type of agriculture, and the extant rural buildings. The area is emblematic of the intense relation between city and country in Italian history, and of the traditional identity of rural landscapes, in contrast with the ever expanding city, which by eroding agricultural land has sometimes compromised century-old heritages. Among present cultivations, the dominant ones are vegetables gardens, crop fields, both bare and with olive-trees, arranged in small holdings often delimited by hedges. The olive ascolane of the Piceno area have been assigned the PDO label, and are present in the list ‘Ark of Taste’ of the Slow Food association, which lists quality food products produced in small quantities. The rural landscape is enriched by pastures and by small woods. In recent years, there has been a decline in pastures, but even more in vineyards. The gradual abandoning of agriculture has caused a problematic advance of woods and the degradation of the composite traditional landscape. Another threat to this valuable rural landscape is the closeness to Ascoli, whose expansion risks transforming rural areas in residential ones, with the inclusion of the Piagge in future building plans. 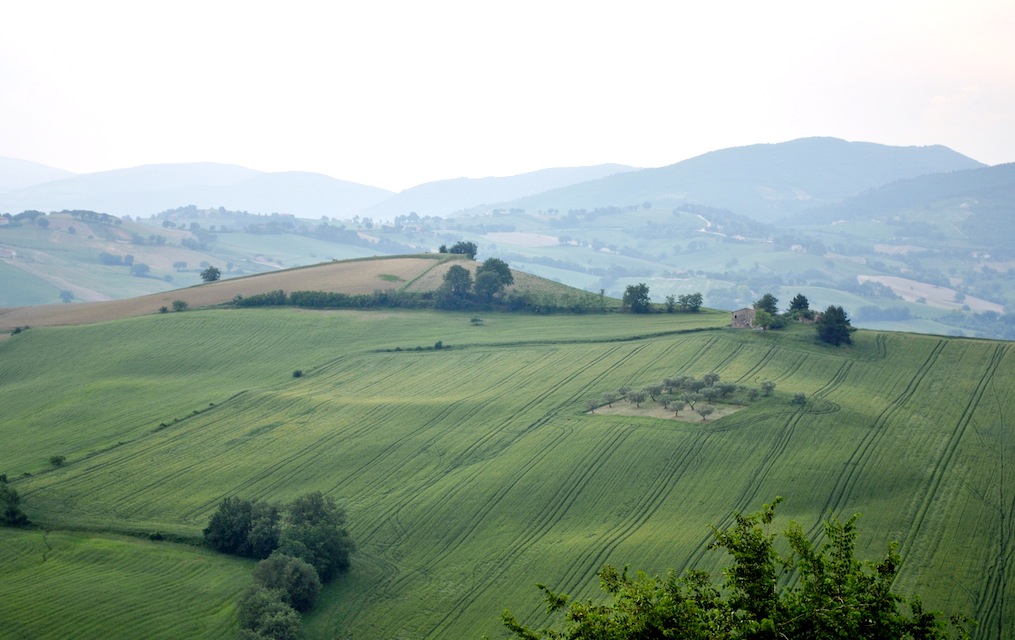 The entire area of Loretello, a locality in the municipality of Arcevia of about 2022 ha, is characterized by the presence of traditional polyculture. The significance of the land around Loretello lies not only in the historical persistence of traditional polyculture, but also in the unique relation between cultivated hills and historical settlements on risings, foremost amongst them the Castle of Loretello, which dominates the surrounding slopes. The rural landscape consists of a network of ancient buildings dotting the ridges and the transversal passings. The hills still show the signs of sharecropping polycultures, of the ancient arrangement of holdings, and of the old rural farmhouses and mansions. The dominant cultivations are spelt, corn, chickling, olives and wine-grapes. The areas closest to the ridges are usually used as pastures-meadows. There is still a sizable presence of woods in certain areas, which alternate with cultivated areas and pastures. The landscape of Loretello has largely retained its integrity, having maintained throughout the centuries the original relationship between human settlements and cultivated hills. Some elements of the historical landscape, such as rows of trees, artificial ridges, borders marked with trees, are still present, albeit in a sporadic fashion. There is also, however, a tendency towards an intensification of agriculture, which has created cultivations based on fixed patterns that have modified the historical landscape. Typical houses and other constructions harmoniously integrate with the patterns of the cultivations. The greatest threat comes from the intensification and mechanization of agriculture and the consequent merging of adjacent lands, which would lead to the elimination of certain traditional features of the holding system, a phenomenon which has already occurred in adjacent areas. 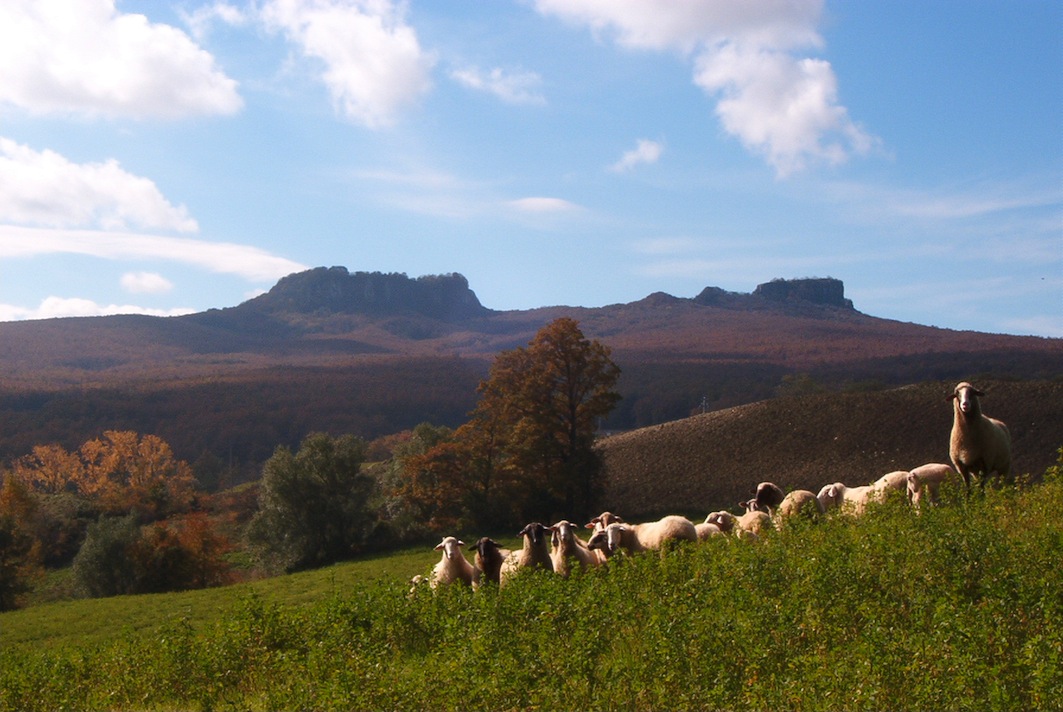 The area extends for about 1662 ha and is characterized by the presence of woods and pastures. It is located at the border between Marche and Tuscany, in the municipalities of Piandimeleto, Frontino, Carpegna, Pennabilli and Sestino. Part of the area is included in the Sasso Simone e Simoncello Natural Regional Park. The significance of the landscape lies in the historical persistence of pastures and woods, which have been used for centuries. The beauty of the area is enhanced by the presence of Mounts Simone and Simoncello, two mountains of calcareous rock with flat summits, and by the fascinating calanchi gullies found especially in the Tuscan section of the area. The area includes extensive wooded areas and lands used for semi-free ranging pasture. Particularly interesting is a forest of Turkish oaks, considered one of the largest of Europe. Other areas instead are pastures and scrubland, the latter a result of the abandoning of lands previously used for crops or pasture. The area, also thanks to being owned by the state, retains a good degree of integrity. Pasture continues to be practiced in open areas, though less than in the past. The area has a certain degree of vulnerability, especially in terms of depopulation, which has led, in the last fifty years, to the spreading of woods over what used to be crop fields and pastures, environments that are very important for the territorial balance of the area and for biodiversity.